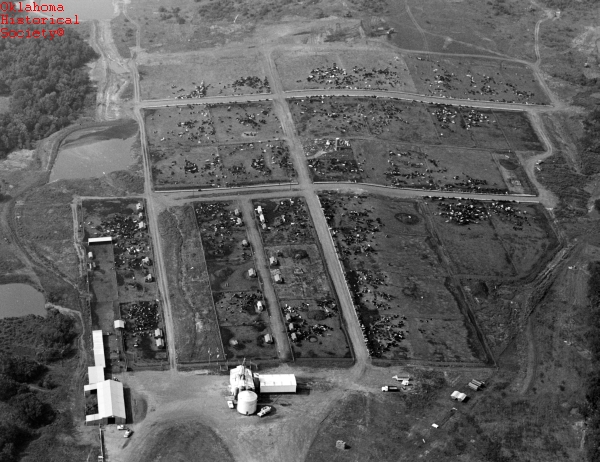 In the early twentieth century Oklahoma feedlots were predominantly small lots on farms. Each lot held from one hundred to four hundred cattle. The cattle were fed grains and forages grown on the farm and were sold locally, or they were taken to a central market for sale and slaughter.

A few large feedlots were constructed around local cotton oil mills to utilize the mills' by-products. The Eufaula Oil Company opened in 1898 in the Indian Territory and reportedly fed up to one thousand head of cattle annually. The Chickasha Cottonseed Oil Company at Chickasha furnished feed to cattlemen who fed their livestock in pens adjacent to the mill. Similar pens were located around other mills and were active until the 1930s.

Large custom feedlots developed in Oklahoma during the late 1960s. Usually the owners of these establishments were local farmers and entrepreneurs who worked together to develop markets for their grains and forages and to provide economic development for their community. Some lots feed as many as seventy thousand head, but a typical feedlot supports from thirty thousand to fifty thousand cattle at one time.

The marketing of "fed cattle" changed when feedlots stopped transporting cattle to a central market, and buyers from the packers started bidding on the animals at the lot. Another dramatic alteration was in the ownership of the cattle. The proprietors of the "custom feedlots" did not own the cattle in their pens but provided feeding and related services. The cattle were owned by ranchers who wanted to retain ownership or by investors. Feedlot owners placed the cattle in pens according to each owner's account.

The key to the early success of large custom feedlots was their adaptation of scientific technology. Efficiency improvements brought decreased feeding costs. The resulting competitive advantage caused a shift in cattle feeding from the Corn Belt to the high plains of Texas, Oklahoma, and Kansas. The beef packing industry followed cattle feeding to this region.

Early in the twenty-first century Oklahoma ranked fifth among cattle-feeding states, with Texas being first and Kansas second. In 2000 twenty-eight Oklahoma feedlots marketed 889,000 cattle. The majority of Oklahoma's feedlots are located in the Panhandle counties. A modern feedlot employs about one person for each twelve hundred head of capacity, buys about $175 million to $225 million of locally grown grain and hay, and provides $40 to $50 million in local services and payroll. Depending on cattle prices, the annual gross sales from Oklahoma's feedlots range from $700 million to $1 billion.

The following (as per The Chicago Manual of Style, 17th edition) is the preferred citation for articles:
Donald R. Gill, “Feedlots,” The Encyclopedia of Oklahoma History and Culture, https://www.okhistory.org/publications/enc/entry.php?entry=FE006.