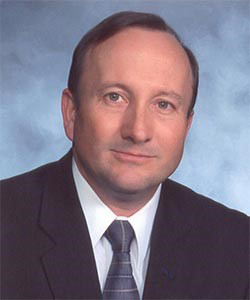 Randy Beutler is a graduate of Southwestern Oklahoma State University (SWOSU), where he received both his bachelor’s and master’s degrees in education with honors. He received his Juris Doctor degree from Taft Law School in 2011.

Beutler taught history and government for eight years at the high school level and was twice named “Teacher of the Year” by his peers at Weatherford Public Schools. In 1992, Beutler was elected to the Oklahoma House of Representatives where he served four terms, eventually being selected as Majority Whip. From 2003 to 2006, Randy served as a senior staff member in Governor Brad Henry’s administration. In 2006, Randy rejoined his alma mater, SWOSU, as vice president for public policy. In February 2010, Beutler was named the 17th president of Southwestern Oklahoma State University. He retired from the position in July 2021.