When Hine came to Oklahoma in 1916 the state was still primarily an agrarian society. While Oklahoma City and Tulsa had some small factories, much of the child labor was found on farms, in cotton fields, and on the streets. Lewis Hine visited country schools that could hold classes only a few months out of the year to accommodate child laborers who would attend between harvest seasons. He also visited the schools for the deaf and blind where students learned job skills to prepare them for life outside the school walls.

Most of the time employers did not want Hine to photograph their child laborers and their work conditions. To gain access to the children, Hine would represent himself as an equipment manufacturer, fire inspector, or whatever it took to get through the doors with his bulky camera equipment. While inside, he would interview children, photograph them, and document important information. Often he would be forced to wait outside the factories or mines for the children to arrive or leave for the day. Hine was relentless when it came to giving children in Oklahoma and across the nation a voice. 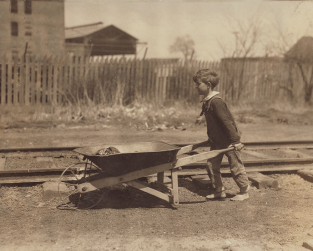