In 1916 Congress passed the Keating-Owen Child Labor Act, which was signed into law by President Woodrow Wilson. Oklahoma native and US Senator Robert L. Owen was a co-author of the bill, which was also supported by the National Child Labor Committee. Two years later, though, the law was declared unconstitutional by the US Supreme Court. In the same year, Congress passed the Child Labor Tax Act. Four years later, this act was also struck down by the US Supreme Court. Also in 1916, Lewis Hine began documenting the horrors of child labor. It would be another thirty years until a law was finally passed and upheld that protected children from long hours, dangerous work environments, and lack of schooling. The Fair Labor Standards Act of 1938 was passed, and in 1941, the US Supreme Court ruled in favor of the children.

In Oklahoma, child labor laws were established during its first territorial legislature in 1890, far in advance of the national movement. The law established a ten-hour work day in factories and workshops for women and children under the age of eighteen, but these laws were obviously still flawed. Kate Barnard, Oklahoma's first commissioner of charities and corrections, worked to update the law in 1907 which stated that children under fifteen could not be employed in an occupation that could be dangerous or unhealthy. Although this was a step in the right direction, the child labor laws in Oklahoma still had little authority to protect children working on farms, selling newspapers, shining shoes, or making deliveries, as these forms of employment were hard to regulate. 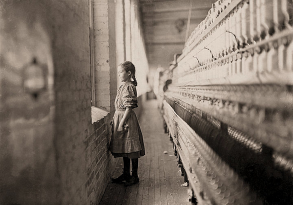 The Mill: A moment's glimpse of the outer world. Said she was 11 years old. Been working over a year. Rhodes Mfg. Co. Lincolnton, North Carolina.