Catherine Ann “Kate” Barnard was born in 1875 in Geneva, Nebraska. After her mother’s death when she was just two years old, Barnard lived in Kansas before moving to Oklahoma City to live with her father in 1891. As a young woman, Barnard earned her teaching certificate and ran a few one-room schoolhouses in Oklahoma Territory. She also worked as a secretary.

Between her teaching background and activism through the Democratic Party and the Catholic Church, Barnard became concerned with the suffering of children and adults alike at the hands of poverty and lack of education. Despite the fact that women were not allowed to vote, or involve themselves in any political issues for that matter, Barnard saw the real potential women had in politics when it came to the care of others. As Oklahoma Territory was gearing up to apply for statehood, Barnard convinced the Oklahoma Constitutional Convention leaders that the new state needed a commissioner of charities that would oversee social reform. In 1907, Kate Barnard became Oklahoma’s first commissioner of charities and corrections, a position she won by a large margin. She was the first woman elected to an Oklahoma state office.

Between her two terms as commissioner, Barnard advocated on behalf of child laborers, education for children, single mothers, convicts being mistreated, and even American Indians children’s rights in the state, a position that made her very unpopular by the end of her terms. Although she left politics in 1915 with quite a few enemies, her legacy as an early female politician and work on behalf of Oklahoma children is still applauded today. 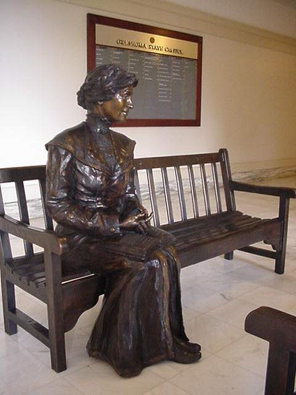 Robert Latham Owen was born in Lynchburg, Virginia, in 1856. His father was president of a railroad company and his mother was Cherokee, originally from Indian Territory. Robert attended school in Virginia and Baltimore, eventually receiving a master's degree from Washington and Lee University in 1877. In 1879, his father died unexpectedly, and Robert and his mother returned to Indian Territory. While there, he became the secretary of the Cherokee Board of Education and studied law.

After passing the bar, officials appointed Robert the head of the Union Agency of the Five Civilized Tribes. During this time, Owen practiced law and edited the Vinita Indian Chieftain. He argued many of his cases on behalf of the Five Civilized Tribes. He argued one of those cases, the "Eastern Cherokee" case, before the US Supreme Court and the decision awarded millions of dollars to members of the Cherokee tribe.

Owen ran for an Oklahoma senate seat after statehood in 1907. He received the most votes out of all the candidates and became one of Oklahoma's first senators as well as one of the nation's first senators of American Indian descent. Senator Owen went on to help create the Senate Banking Committee and served as its first chairperson. Owen also led on issues like child labor reform, women's suffrage, prohibition, and the direct election of senators.

Owen had many political victories, including the co-authoring and passage of the Keating-Owen Act, or the Child Labor Act of 1916. He worked tirelessly with the National Child Labor Committee and was highly influenced by Lewis Hine's photos. 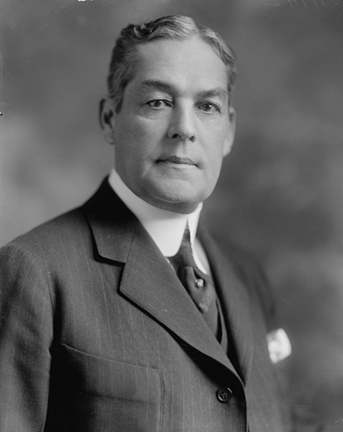 Robert L. Owen (image courtesy of the Library of Congress).

Louis Brandeis was a lawyer as well as a Supreme Court Justice from 1916 to 1939. He is remembered as a progressive intellectual and social justice reformer for his work in privacy and labor laws. Louis Brandeis was born in Kentucky in 1856 to immigrant parents from Bohemia. He graduated from Harvard Law School with the highest grades in the school's history at only twenty years old. Brandeis then established a law firm in Boston where he worked at defending the "common man" against federal and state injustice.

In 1908, Brandeis represented the state of Oregon in the landmark Supreme Court case Muller v. Oregon. He argued that states had the right to pass laws that limited the number of hours that women worked.

Because of Brandeis's argument that employers could and should be regulated by the state, child labor regulations were also called into question. The victory of Muller v. Oregon created a legal precedent whereby child labor laws could be instituted.

Mary Harris "Mother" Jones was an Irish-born wife and mother of four who immigrated to Canada and then the United States in 1860. She worked as a dressmaker and seamstress and even had her own dress shop in Chicago, but it burned down in the Great Chicago Fire of 1871. When her husband and all four of her children died due to yellow fever in 1867, Jones understandably had a hard time coping with her loss. Jones became interested in child labor laws and the protection of children, like hers, and the lack of accountability that many employers had when it came to the law. Jones began organizing labor marches and speeches. At one point, Jones had children come on stage or sit in cages while she discussed the horrible conditions children all over the county were working in. At sixty years old, Mother Jones was nicknamed "the most dangerous woman in America" for her powerful alliances and reform methods against child labor. In 1903, Mother Jones organized a "Children's Crusade," a march from Pennsylvania to the home of President Theodore Roosevelt in New York with banners demanding "we want time to play" and "we want to go to school." 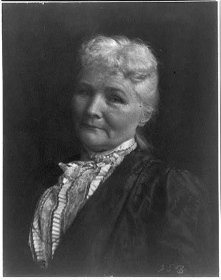 Mother Jones (image courtesy of the Library of Congress). 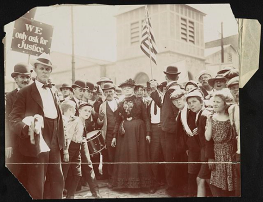 "Mother" Jones and her army of striking textile workers starting out for their descent on New York. The textile workers of Philadelphia say they intend to show the people of the country their condition by marching through all the important cities (image courtesy of the Library of Congress).