The Second Industrial Revolution is the period between the Civil War and the beginning of World War I. It was a time of expanding technology, machinery, production, and, of course, labor. More and more Americans began working outside of the home, but regulations, or laws put in place by the federal government or state to protect citizens, were not growing with the new labor. Because many citizens, including children, were being treated poorly by employers, activists began to organize to create change in their communities, or social reform.

Social reform photographer Lewis Hine spent much of the early 1900s traveling the United States documenting what some called “child slavery.” Child labor was widespread. According to the 1900 US Census, two million children worked in factories, mills, mines, cotton fields, and the streets. Most of the children were not in school. Many were illiterate and some did not speak English. It was commonplace that the children would work twelve to fourteen hour days. Lewis Hine was hired by the National Child Labor Committee in 1908 to document this ever-growing problem in order to persuade the public and the government to pass meaningful laws to protect children. 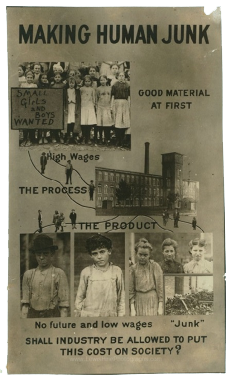