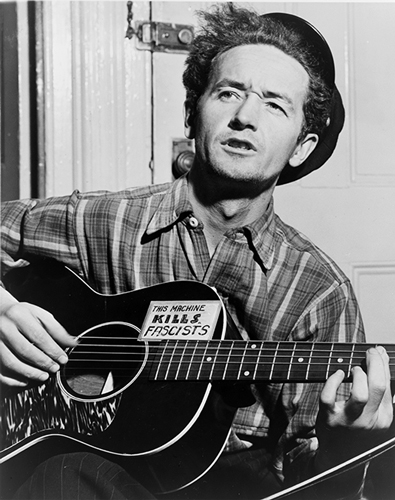 Woody Guthrie was born in Okemah, Oklahoma, in 1912. His father was a prominent businessman and politician. His mother passed away when he was fourteen while his father was working in Pampa, Texas. Woody and his siblings lived on their own in Okemah until his father sent for them to join him four years later. During this time, Woody worked odd jobs around Okemah and began learning to play music. He had a natural ability to learn songs by ear and often played around town for money or food.

In Pampa, Texas, Woody married his first wife, with whom he had three children. When the Great Depression began, Woody left to find work in California. While traveling, Woody wrote many songs about his experiences during the hard times of the Depression. When he got to California, Woody played songs on the radio for a little money and was known as the "Oklahoma Dust Bowl Balladeer." When he had made enough money, he sent for his wife and children to join him.

Eventually, Woody left for New York City to try to make it as a singer. This is where he wrote his most famous songs, like "This Land is Your Land." During World War II, Woody worked as a merchant marine and was on three boats torpedoed by the Germans. After the war, he returned to writing and recording music. In the 1950s, Woody Guthrie was diagnosed with Huntington's disease and lived in a hospital for the last thirteen years of his life. He continued to write and help others write folk music, though. He was friends with famous folk singers like Bob Dylan. Today, Woody Guthrie is considered one of the most influential songwriters in the twentieth century.

Caroline Henderson was born in Iowa in 1877. After graduating from Mount Holyoke College, she claimed a homestead plot in Texas County, Oklahoma, and taught school. A year later, she married Will Henderson, and they had a daughter named Eleanor. In time, they managed to buy a whole section of land, 640 acres, and made a lot of money during the wheat boom.

stubbornly stayed behind throughout the whole Dust Bowl. She spent her time during the Dust Bowl writing letters and essays that a friend had published in a magazine, The Atlantic Monthly. She wrote about life in the southern plains and how the Depression and the Dust Bowl were changing the way people farmed. Her letters and columns are a great source of information on life in the Oklahoma panhandle during the Dust Bowl and the Great Depression. She and her husband died in 1966, and their farmland is held in trust to this day, on the condition that it is never plowed again.

Our recent transition from rain-soaked eastern Kansas with its green pastures, luxuriant foliage, abundance of flowers, and promise of a generous harvest, to the dust-covered desolation of No Man's Land was a difficult change to crowd into one short day's travel.

Eleanor has laid aside the medical books for a time. Wearing our shade hats, with handkerchiefs tied over our faces and Vaseline in our nostrils, we have been trying to rescue our home from the accumulations of wind-blown dust which penetrates wherever air can go. It is an almost hopeless task, for there is rarely a day when at some time the dust clouds do not roll over. 'Visibility' approaches zero and everything is covered again with a silt-like deposit which may vary in depth from a film to actual ripples on the kitchen floor. I keep oiled cloths on the window sills and between the upper and lower sashes. They help just a little to retard or collect the dust. Some seal the windows with the gummed-paper strips used in wrapping parcels, but no method is fully effective. We buy what appears to be red cedar sawdust with oil added to use in sweeping our floors, and do our best to avoid inhaling the irritating dust."

Caroline Henderson and her husband on their homestead in the 1920s (image courtesy of PBS).

Hugh S. Johnson was born in Kansas in 1882. In 1893, Johnson's father left for the Cherokee Outlet, receiving an appointment as postmaster for the new town of Alva, Oklahoma. Johnson's father also helped to organize the Alva public schools and in 1898, the first graduating class from Alva High School included a sixteen-year-old Hugh Johnson. He then prepared for the United States Military Academy (USMA) at West Point while attending Northwest University.

After finishing at The USMA, he served with General John Pershing in the Punitive Expedition against Poncho Villa and ran the draft during World War I.

Hugh Johnson spent the rest of his life as a writer and political commentator in newspapers. He died in 1942 from pneumonia and was buried in Arlington National Cemetery in Washington, DC. 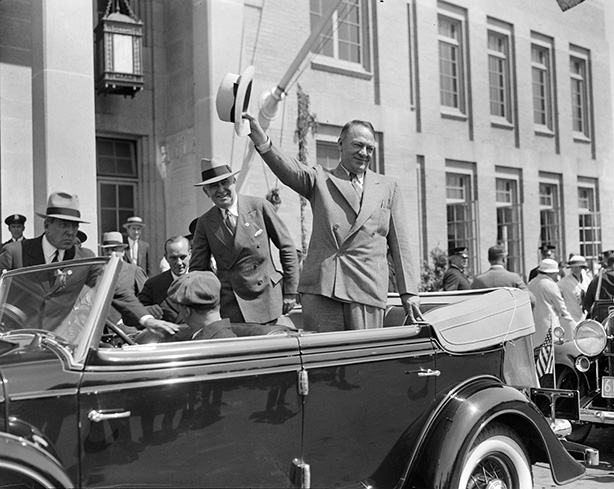 Governor Hugh S. Johnson at a parade in Boston in 1933 (image courtesy of the Boston Public Library). 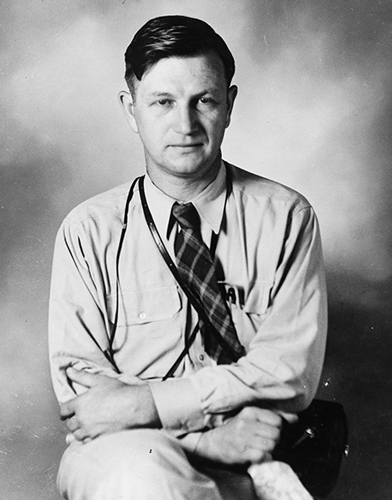 Russell Lee, 1942 (image courtesy of the Library of Congress).

Russell Lee was born in Ottawa, Illinois, in 1903. His first career was as a chemist, but he decided to quit that job and become an artist. He was originally interested in painting but found that he preferred photography.

In 1936, he took a job with the Farm Security Administration (FSA)as a photographer. His job was to document the lives of people across the United States. He traveled all over the country, taking pictures in California, New Mexico, Texas, and even Oklahoma. Many people consider his photographs to be iconic images of the Great Depression. In Oklahoma, Lee documented the lives of the people living in the migrant camp on May Avenue, south of the North Canadian River and west of the meat-packing district. His pictures showed the people of the United States, and the world, the conditions that many families lived in during these hard times. More than half of the tenants in the migrant camps in Oklahoma City were tenant farmers and sharecroppers from rural Oklahoma that came to the city to find work.

Lee worked for the government as a photographer until 1947, when he became the first professor of photography at the University of Texas at Austin. He worked there until he retired, and passed away in Austin in 1986 at the age of 83.