Home |   Learn |  How did Oklahomans Deal with the Great Depression and the Dust Bowl?

How did Oklahomans Deal with the Great Depression and the Dust Bowl?

William, or "Alfalfa Bill," Murray was the governor of Oklahoma when the Depression began. He wanted to help the people of Oklahoma and the United States out of the Depression, so he ran for the Democratic nomination against Franklin Delano Roosevelt (FDR). When FDR won the nomination and then the presidency, Governor Murray was upset. So when the first New Deal Programs began, Governor Murray did everything he could to make sure they did not work. This angered many people in Oklahoma. When Governor Murray's term was over in 1934, E. W. Marland succeeded him.

Marland was an oilman and entrepreneur who saw the New Deal as a good thing for the people of Oklahoma. His first priority as governor was to bring the New Deal to Oklahoma. In his term as governor, he brought in 1,300 WPA projects that employed approximately 90,000 Oklahomans. He helped to create the Interstate Oil Compact to help regulate oil prices, and also created the Oklahoma Highway Patrol. When his term was over in 1939, he ran for a seat in the United States House of Representatives but was not elected. He returned home to Ponca City and attempted to revive his oil business. 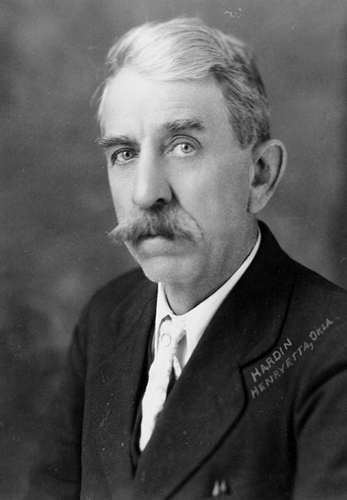 A well-known politician and lawyer from Oklahoma, William "Alfalfa" Bill Murray participated in some of the most important political events in the early years of Oklahoma, including the drafting of the constitution for the proposed state of Sequoyah in 1905 (image courtesy of the Library of Congress). 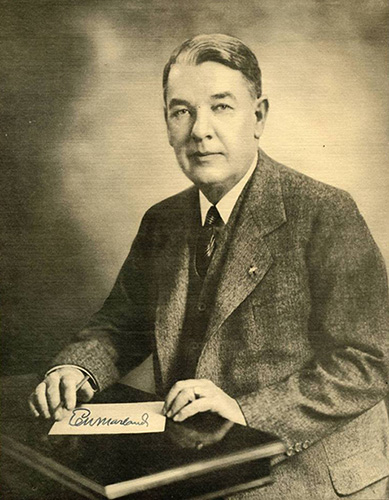 Ernest Whitworth Marland was a prominent entrepreneur and politician in Oklahoma. He was the founder of the oil company that became Conoco-Phillips and was governor of Oklahoma from 1935 to 1939 (23139.G47, John Dunning Political Collection, OHS).

The Depression caused many people to lose their jobs and their homes. Those same people took everything they still owned and went in search of work. Moving across the country in search of homes or jobs is often called "migration," and the people who move are sometimes called "migrants." People moved from rural or farm areas all over the country to the bigger cities, where they could still find some work. The mass movement of these people was difficult for cities to handle, as many of them were already crowded. This problem was not solved until after World War II. 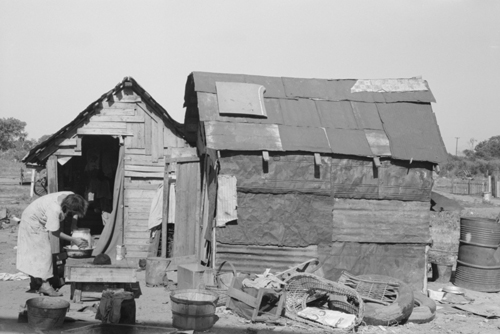 This family has built a temporary shelter in the May Avenue Camp. Camp residents used materials salvaged from the city dump to build many of their homes (photo by Russell Lee, courtesy of the Library of Congress).

Some of these people from Oklahoma went to California, a journey made famous by John Steinbeck's novel The Grapes of Wrath, but most families traveled to cities nearby, like Oklahoma City or Tulsa. The migrants were nicknamed "Okies." They set up whatever shelters they could and began looking for work. Many of the migrants moved into the same area together, creating "shantytowns" or "Hoovervilles." People called them "Hoovervilles" after President Hoover, who they blamed for the Depression. There was a large migrant community on May Avenue in Oklahoma City that was photographed extensively by a man working for the Farm Security Administration named Russell Lee. The camp was built partly on the city dump, south of the North Canadian River and between the May Avenue bridge and the Oklahoma National Stockyards. 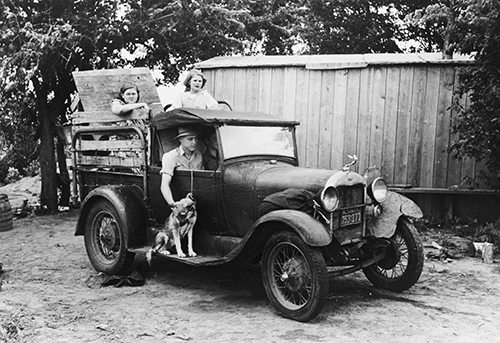 A family in Muskogee is getting ready to leave for California to find work. They have packed as many of their belongings as they could (photo by Russell Lee, courtesy of the Library of Congress).

What Does it Mean to Be an "Okie?" 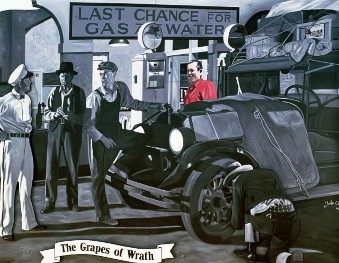 A billboard in California advertising The Grapes of Wrath (image courtesy of the Library of Congress).

When John Steinbeck published The Grapes of Wrath in 1939, he put "Okies" on the national stage. The book highlights the Joads, a family from Oklahoma who decided to migrate to California because of the Dust Bowl. Although Steinbeck did not come up with the term "Okie" to describe migrants leaving the states affected by the Dust Bowl in search of jobs and relief from the Great Depression, many became upset with the term's popularity and derogatory nature. For Oklahomans in the 1930s and even 1940s, being called an "Okie" was offensive.

Even twenty years later, when the state of Oklahoma was planning its 50th anniversary of statehood, the term "Okie" was still disliked by many people in Oklahoma.

When Oklahoma Representative (and, later, Governor) George Nigh found out John Steinbeck was to be the guest of honor, he requested Steinbeck's invitation be rescinded. Here's what George Nigh had to say about the situation:

I'm tired of John Steinbeck. In fact, I took privileges of the floor in the semi-centennial for the State of Oklahoma. They invited John Steinbeck to be the guest of honor. The guy who wrote The Grapes of Wrath. The guy who put Oklahoma, gave it its image that to this day, holds us back. 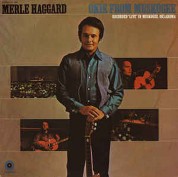 By 1970, many Oklahomans had come to embrace the term "Okie." Country western singer Merle Haggard brought the nickname to life with his hit song, "Okie from Muskogee."

"I'm proud to be an Okie from Muskogee"

Today, the term "Okie" is celebrated in many ways. You can find the word on shirts, bumper stickers, and signs across the state. It is now a term many Oklahomans use to express love and pride for their state, and the hard times our state survived.