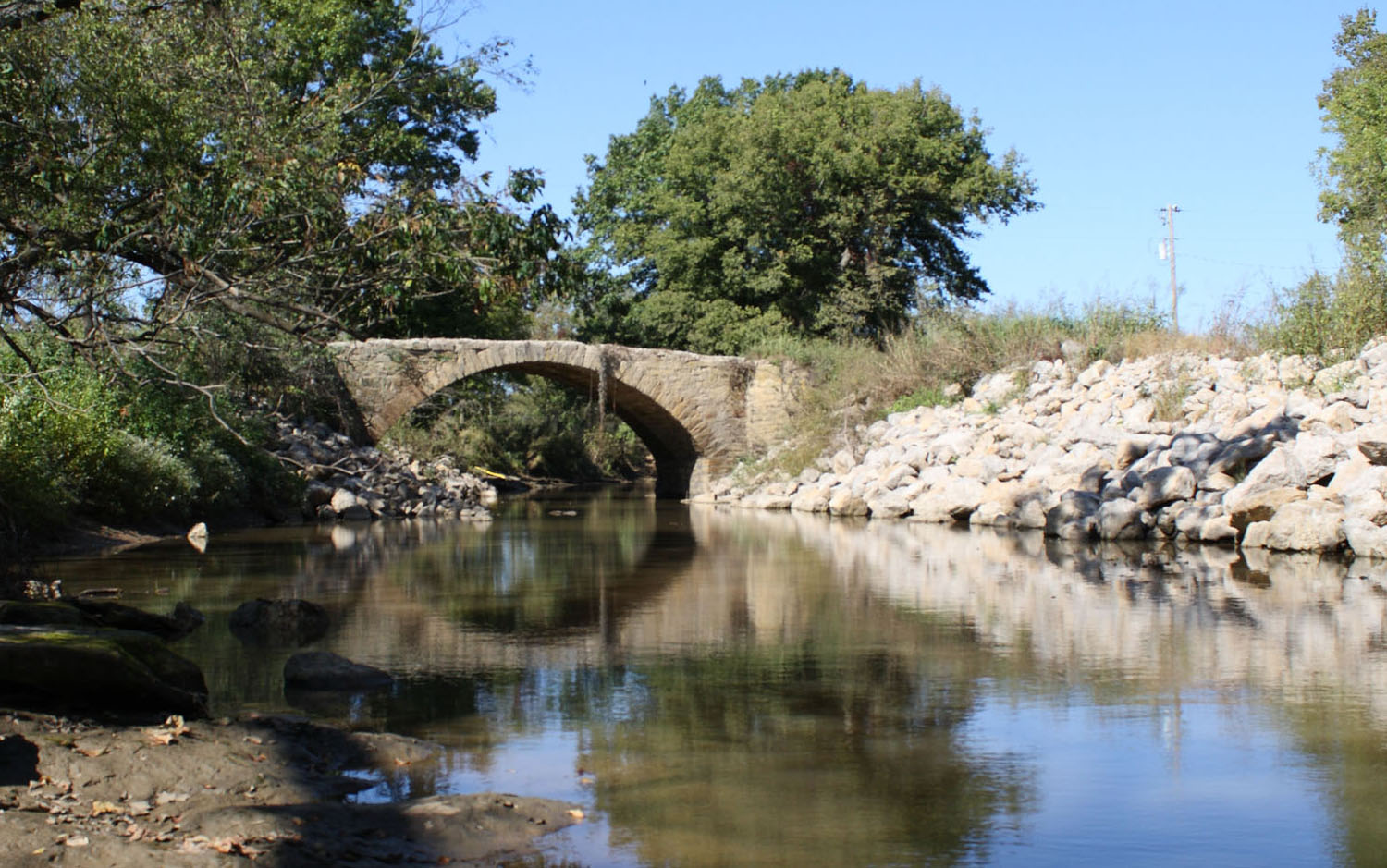 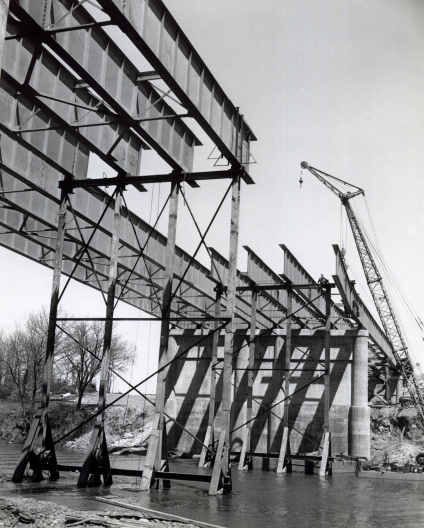 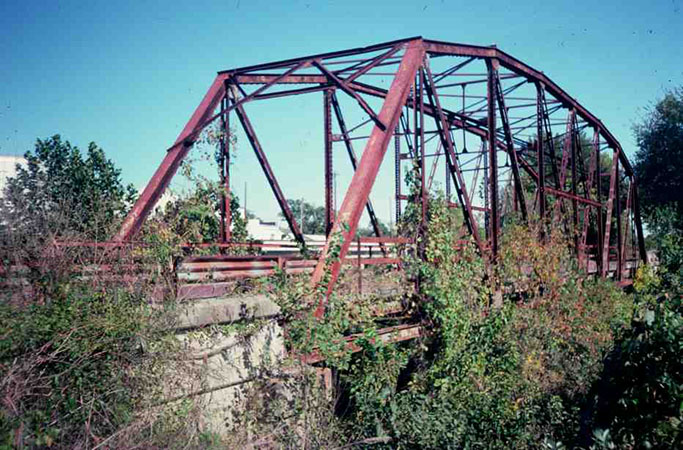 Oklahoma's bridges represent the growth of the transportation system, as well as the social and commercial patterns that shaped that system. Before and immediately after 1907 statehood, population expansion and town growth necessitated road improvements. The state benefited from the numerous bridge-building companies that grew up in the years from 1890 to 1918. The production of metal truss bridges was a major engineering and manufacturing achievement. By this time, steel companies were producing uniform rolled beams, plates, bars, and rods that enabled standardization in bridge design and prefabricated components. Bridge companies simply prepared the specific bridge parts for on-site assembly.

By the late nineteenth and early twentieth centuries Pratt and Warren truss designs and variants had proven their effectiveness and were everywhere. A Pratt truss is defined by vertical beams that usually form an "X" pattern in the center of the truss and carry compressive (pushed together) forces. Between these verticals, diagonal beams carry tensile (pulled apart) forces and. A Warren truss has diagonal beams in a "W" pattern that alternate between carrying compressive and tensile forces as loads travel over the bridge. By the time most of Oklahoma's bridges were appearing, the Warrens with additional, vertical support beams had become the standard. Both Pratt and Warren designs could be built with flat or curved (polygonal) top chords. The curved-top-chord versions of the Pratt design, called Parker and camelback, became the most common.

While steel truss bridges were usually the preferred choice, especially for longer spans, some other types were also built during Oklahoma's early years. Concrete and stone arch bridge designs employed an arch barrel constructed of stone or concrete to support loads transmitted from the bridge deck through the spandrel walls and fill material. An example is the 1924 concrete arch bridge over Pennington Creek in Tishomingo in Johnston County. A few suspension bridges existed in the early years; in these, towers carry horizontal cables and vertical cables that hold up a suspended or "swinging" bridge deck and carry the tension and compression applied to it by the load. The Morrison Suspension Bridge in Noble County is a non-extant example that is listed in the National Register (NR 19800523).

Because railroad companies needed dependable bridges to enable rapid expansion, advances were made in metal truss bridge technology. Railroads were the first to commence widespread bridge-building in Oklahoma. At statehood, county governments organized and took responsibility for road and bridge construction, providing the funding necessary for building road bridges on a large scale. Counties solicited construction bids and contracted with bridge-building companies that shipped prefabricated steel truss bridges in pieces for on-site assembly. For example, in 1911 Comanche County's commissioners selected Stupp Brothers Bridge and Iron Company of St. Louis, Missouri, to construct a Pratt through truss over Post Oak Creek near Chattanooga.

Much of Oklahoma's early growth coincided with the nationwide good roads movement, which sought to improve roads that were generally not very well constructed or consistently maintained. In 1904 the first Oklahoma territorial good roads convention met in Guthrie and organized the Oklahoma-Indian Territory Good Roads Association. The push for road improvements came largely from merchants desiring more business for their own establishments and their communities; consequently, local good roads associations were active. To them, steel truss bridges were evidence of progress that brought them into a world of commerce and influence beyond the limitations of unimproved, poorly-maintained roads. These groups often supported construction of named interstate highways like the Ozark Trails, the Postal Highway, or the Jefferson Highway.

Meanwhile, the Oklahoma State Highway Department (SHD) emerged over a period of years as the need for a centrally coordinated network of state and U.S. highways became evident. The state legislature created the Oklahoma Department of Highways in 1911, appointing Sidney Suggs, a leader in the good roads movement, as commissioner of highways. Initially, the agency's main duties were planning and promoting highways. Although it channeled federal and state funding and formulated construction specifications for road and bridge projects, the counties, which provided the matching funds, were still ultimately responsible for project construction and maintenance. In 1924 the legislature reorganized the system and created a three-member Oklahoma State Highway Commission. It had authority to build and maintain roads designated as state and U.S. highways. The highway commission created a numbered state highway system in 1924, while in 1925 and 1926 a Joint Board of State Highway Officials laid out the numbered U.S. highway system.

For bridges on the state and federal systems, SHD engineers developed standard designs for steel trusses and other types of bridges. The standards were often revised accommodate the ever-increasing volume, weight, and speeds of vehicles on the roads. Engineers continued to use steel truss bridges, particularly the Pratt and Warren trusses and their variants, for longer spans. A major project built by the State Highway Commission and employing these standards in 1929–30 was a twenty-six-span Parker through truss bridge on the Pack Saddle crossing of the South Canadian River on U.S. Highway 283 between Roger Mills and Ellis Counties.

Highway department engineers also had standards for other bridge types. In a reinforced concrete slab bridge, the traffic load is borne by a flat concrete slab that also serves as the deck; longer spans would require thicker slabs, so for greater lengths, the reinforced concrete T-beam was more economical. It is constructed of a slab-and-stem system with individual units poured in the shape of the letter "T". A steel I-beam bridge has parallel steel I-beams, with the deck carried on top of the beams. Each beam is one piece of steel. In a steel girder bridge, a girder is fabricated (or built up) from multiple steel plates or angle irons. Therefore, girder bridge spans are usually longer than I-beam bridge spans.

The economic distress of the Great Depression of the 1930s led to unprecedented federal funding for road and bridge construction to help relieve unemployment and thereby impacted bridge development. The National Industrial Recovery Act and subsequent emergency relief appropriations bills directed funds to the SHD through the Bureau of Public Roads (BPR). The regulations tied to this funding specified labor-intensive construction practices to employ a larger number of people on these projects. As no state matching funds were required, the highway department was able to build numerous exceptionally large bridge projects during this decade. Oklahoma county governments were able to sponsor many local road and bridge projects with assistance from the Works Progress Administration (WPA) to provide work for the unemployed. A good example of a WPA bridge is the steel I-beam Rock Creek Bridge (NR 08000853) in Pittsburg County, constructed in 1937. A distinctive feature of this and many other WPA bridges is their use of stone masonry, most often in piers, abutments, and wing walls. Counties could operate rock quarries with WPA funds, and the labor-intensive nature of masonry construction would employ more people.

World War II and its aftermath also affected bridge construction. Wartime rationing, which continued through the Korean conflict of 1950–53, made steel difficult to obtain, even after the wars. Moving steel truss bridges for re-use at different locations was a common practice, and dam construction in the 1940s and 1950s made a number of truss bridges obsolete at their original locations and available for reuse. In the spring of 1943 widespread flooding partially washed out a large Parker through truss bridge over the Arkansas River near Webbers Falls. The highway department was able to repair it with one Pratt through truss and approximately four camelback through trusses from other locations, an example of how rebuilding in this manner often resulted in joining different types of trusses that normally would not be seen together in an entirely original bridge. The end of rationing, the mid-twentieth-century increase in urban sprawl and traffic, and the Federal Aid Highway Act of 1956, which funded the massive interstate highway system construction program, combined to bring about much more standardized bridge construction.

By this time some newer bridge designs became widespread. Although reinforced concrete rigid frame bridges date from the 1920s, SHD engineers did not use them extensively until the post–World War II urban expressway projects. This bridge type integrates vertical supporting legs with a load-bearing concrete slab deck, and the legs help to support the loads. The design's low profile and simple lines were favored for scenic and park settings. For example, a 1972 project in Oklahoma City employed five separate concrete rigid frame bridges to elevate Lincoln Boulevard and the lawn on the Oklahoma State Capitol grounds to allow Northwest Twenty-third Street to pass under them. In the prestressed concrete beam bridge design, additional internal compressive force is introduced into a concrete beam by releasing tension applied to its reinforcing cables or bars, making the beam stronger and allowing for greater length than regular reinforced concrete. Prestressed concrete beams also are more economical than steel I-beams for longer spans. Because of these advantages, the prestressed concrete beam design soon dominated bridge construction.

Travelers on Oklahoma's city, county, and state roads and federal highways still use bridges of a variety of ages, types, and materials, illustrating more than a century in the history of bridge technology. From the early steel truss bridges enabling farmers to bring their crops to market in nearby towns, to modern bridges carrying interstate traffic, bridges have helped to make possible an ever-expanding range of commerce and exchange beyond the boundaries of Oklahoma.

The following (as per The Chicago Manual of Style, 17th edition) is the preferred citation for articles:
Anna Eddings, “Bridges,” The Encyclopedia of Oklahoma History and Culture, https://www.okhistory.org/publications/enc/entry.php?entry=BR034.