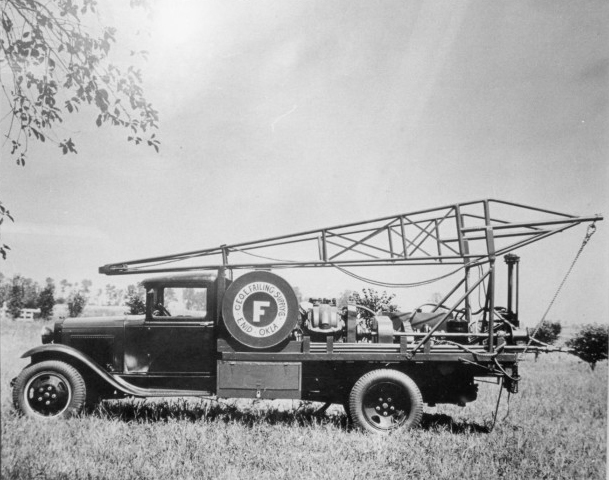 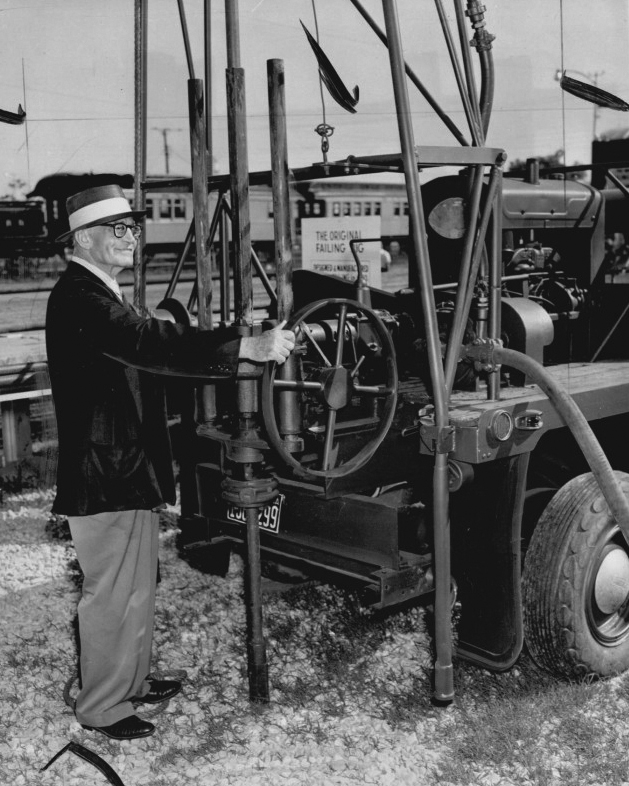 Born in Mendota, Illinois, on November 8, 1889, to George and Clara Failing, George E. Failing combined a genius in mechanics, engineering, industry, and geology. Moving to Tulsa with his family in 1906, he attended Henry Kendall College (now the University of Tulsa). There he met socialite Kathryn E. Steinberger, and they married in 1909. He went to work in the oil business and then started his own firm in 1918. The Garber Tool and Supply Company serviced cable tools and rotary rigs. Failing began to manufacture fishtail bits and in 1922 acquired a major account with Sullivan Machinery Company.

With Burt Garber, Failing drilled his first well at Salt Fork in 1922. It was successful, and Failing began acquiring leases and drilling more wells. As the supply store prospered, he moved his operations to Enid. Buying 120 acres north of town on Highway 81, he built an elaborate estate that was completed in 1931. When the Great Depression struck in 1929, his bankers called in about $125,000 in loans, business dried up, and he lost everything but his home.

Reflecting on the oil business, Failing realized that the best way to stay out of the hole was to find a better way to drill one. The commonly used steam-powered, portable rotary drilling rig took about a week to erect and to drill fifty feet. Envisioning a rig that could be moved quickly and easily, in 1930 he mounted an existing rig on a 1927 Ford farm truck, adding a power take-off assembly to transfer power from the truck engine to the drill. The new portable rotary rig could drill ten fifty-foot-deep holes in a day. He filed for patents and launched the George E. Failing Company to perform contract drilling. His first rigs were used for structure drilling (obtaining cores) and for shot hole drilling (planting explosives).

In 1933 Failing and his equipment were near Conroe, Texas, when a major oil well fire erupted. Tremendous well pressure prevented it from being extinguished. Working in a fog of Foamite behind sheets of asbestos, he drilled a dozen six-hundred-foot holes around the inferno in a matter of hours, relieving the pressure and allowing fire fighters to extinguish the blaze. He lost hearing in one ear and partial sight in one eye, but he gained the respect and appreciation of the drilling profession. With a bonus from Humble Oil Company, he established a second office in Houston to market to Humble, Shell, and Sun. When other companies began requesting rigs for their drilling crews, Failing concentrated entirely on engineering, manufacturing, and marketing.

George Failing ultimately held more than three hundred patents for various tools, from rock bit cores to an apparatus for seismic surveying. He retained every patent for his company. By the end of 1935 the Failing Company manufactured five different portable rigs with capacities of 250 feet to more than 5,000 feet. From 1937 through 1941 annual sales averaged over $500,000 as Failing rigs followed the industry around the world.

Before World War II began, Failing designed a drill that was small enough to fit on a C-47 transport plane. A Jeep engine could supply power to the drill. When war came, the company switched entirely to producing portable drills, supplying Allied troops with water as they moved around world. During 1941–45 Failing manufactured $5 million in portable drills, spare parts, and drill pipe for the U.S. Army and the U.S. Navy. On October 6, 1944, the Failing Company received the Army/Navy Award for excellence in the production and manufacture of war materials.

With the war effort behind him and his company firmly established, Failing devoted himself to philanthropic projects. He worked on a number of civic projects and sponsored softball and baseball teams. The Failing Company continued to grow. In 1948 it had an eighty-thousand-dollar monthly payroll in Enid. In 1952 the company reported sales of more than $6 million and had an order backlog worth more than $2 million. In 1953 Failing sold the company to Westinghouse Air Brake, which in 1972 sold it to Azcon Corporation, but each new owner continued to use the George Failing Company name. On November 23, 1976, George Failing got in his car, drove to the hospital, and died at the age of eighty-seven.

The following (as per The Chicago Manual of Style, 17th edition) is the preferred citation for articles:
Kathy Dickson, “Failing, George E.,” The Encyclopedia of Oklahoma History and Culture, https://www.okhistory.org/publications/enc/entry.php?entry=FA002.