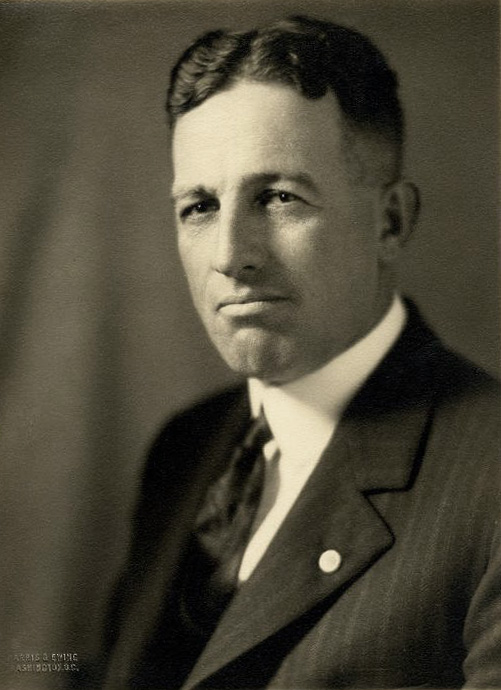 Holloway was at home when informed that he had become governor of Oklahoma upon Gov. Henry S. Johnston's removal from office on March 20, 1929. Calling for "an era of goodwill," Holloway reassured Oklahomans who had lost faith in their government during weeks and months of the impeachment process.

Holloway was born December 15, 1888, in Arkadelphia, Arkansas, the only son of Stephen Lee Holloway, a Baptist minister, and Molly Horne Holloway. The future governor was educated at Ouachita College in Arkadelphia and became friends with upperclassman Henry G. Bennett, later the president of Oklahoma A&M College (now Oklahoma State University). With Bennett's help, Holloway was named principal of the Hugo, Oklahoma, elementary school. Holloway received a law degree from Cumberland University in Lebanon, Tennessee, in 1914 and opened a law office in Hugo. He was elected Choctaw County prosecuting attorney in 1916.

On June 16, 1917, Holloway married another Hugo schoolteacher, Amy Arnold, of Texarkana, Arkansas. Holloway volunteered for officers' training school in World War I, but before he left for Europe, the war ended. In 1920 he was elected to the Oklahoma Senate from Choctaw, McCurtain, and Pushmataha counties. In a second term he was chosen as president pro tempore.

In 1926 Holloway, a Democrat, was elected lieutenant governor. He served in Gov. Henry S. Johnston's shadow until the governor's battle with the legislature ended in his impeachment and removal from office. Seeking to improve Oklahoma's national image, tarnished during the Johnston impeachment trial, Holloway pushed legislation to improve the state highway commission and eliminate toll bridges and toll roads. In the early years of the Great Depression he led state government through deep budget cuts caused by declining revenues. Holloway presided over a transition period between the booming and boisterous twenties and the depression-dominated thirties.

Holloway never sought public office again after leaving the Governor's Mansion in January 1931. He established a successful law practice in Oklahoma City and served under three governors as Oklahoma's representative on the Interstate Oil Compact Commission. His son, William J. Holloway, Jr., also became a lawyer and was appointed as a judge of the U.S. Court of Appeals for the Tenth Circuit by Pres. Lyndon B. Johnson in 1968. William J. Holloway died at age eighty-one on January 28, 1970, in Oklahoma City.

The following (as per The Chicago Manual of Style, 17th edition) is the preferred citation for articles:
Bob Burke, “Holloway, William Judson,” The Encyclopedia of Oklahoma History and Culture, https://www.okhistory.org/publications/enc/entry.php?entry=HO017.