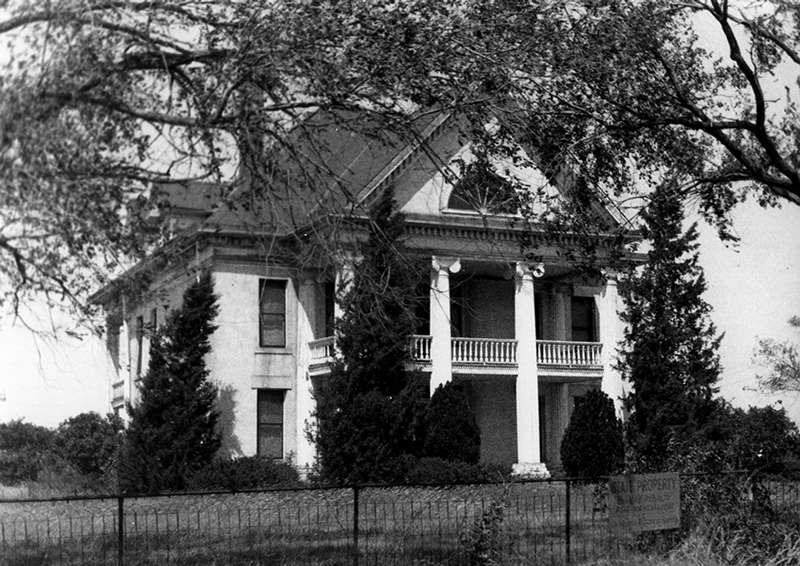 The presence of first- and second-generation Irish and Scots-Irish (progeny of Presbyterian Scottish settlers in Ireland) in present Oklahoma can be traced to the federal policy of relocating American Indians, especially the Five Tribes. Many of the mixed-blood members of the groups that moved to Indian Territory in the early- to mid-nineteenth century had an Irish parent or spouse. In 1847 the Choctaw Nation raised a significant amount of money to provide relief for the Irish famine. This gesture not only connected many with their parents' forebears, but also showed empathy for a people to whom they could relate in suffering. The Choctaws had recently faced hardship on their own "trail of tears" when the tribe had been forcibly removed to the Indian Territory. In 1995 Ireland's president, Mary Robinson, visited Durant to thank the Choctaw people for their act of kindness more than a century earlier.

In the early 1800s a few Irish trappers and traders settled in the region. A number of U.S. Army personnel stationed in the frontier forts of Indian Territory also had Irish ancestry. The next influx in numbers came with the railroads. In 1871–72 the Missouri, Kansas and Texas Railway Company (MK&T) built through Indian Territory. John Scullin's Irish Brigade, the name given to the Irish-born tracklayers, constituted the majority of the manual laborers. Many other early-day railroads used Irish employees. Several stayed in the territory, with many marrying into the Indian Nations. One of these, Patrick Shanahan, profited from his knowledge of the Atlantic and Pacific Railroad's plans by improving land along its route; the tracks were subsequently laid through the territory by the St. Louis and San Francisco Railway. A number of MK&T hands located in the Atoka area, and Father Michael Smyth (born in Ireland) oversaw the 1872 construction of Indian Territory's first Roman Catholic church, St. Patrick's, to serve them. Since that time a great number of Irish Catholic priests have ministered to Oklahoma parishes. In the 1950s, as a result of a recruitment effort by the Oklahoma church, twenty Irish-born priests served in the state.

From the 1870s the territory's first commercial coal mines attracted immigrant miners to the Choctaw Nation. The Irish, along with English, Welsh, and Scots, were among the first to work there. By the 1890s the majority of immigrant miners hailed from other parts of Europe. Many of the Irish who remained in the coal industry had been elevated to jobs as foremen or superintendents or had assumed ownership roles. The Irish also became leaders in the miners' unions. By 1908 of the total 3,378 foreign-born miners only 92 Ireland-born worked in the Southwest Coal-mining District.

A number of Irish participated in the land runs that established Oklahoma Territory (O.T.). In 1890 the U.S. Census reported 329 Oklahoma Territory residents that claimed to have been born in Ireland. As O.T.'s population increased, so did its native Irish population, climbing to 1,384 in 1900. Most of the immigrants had lived in other states before arriving in Oklahoma. Characteristically, most Irish migrated as a family. The settlers' occupations varied; a number were stonecutters (in 1893–94 nine of these Irish artisans were hired to help build the Lynch building, Tulsa's first masonry structure). Others were farmers and ranchers. Frank Murray (1832–92) serves an example of the latter. Born in Ireland, he immigrated to the United States in 1850, living in Philadelphia, New Orleans, and Texas before carrying the mail between Fort Washita and Fort Arbuckle. In 1871 he married a Chickasaw woman and became an intermarried citizen. In 1872 he located in Erin Springs (in present Garvin County), which he named for his original country, and engaged in ranching. At one time he owned twenty-six thousand head of cattle and held eight thousand acres. Although Erin Springs was settled and named by an Irishman, the town of Shamrock, Creek County, had no sizable Irish population, but it nevertheless capitalized on being named for the Emerald Isle. The oil-boom town's early newspapers were titled The Brogue and The Blarney, and the streets were named Tipperary, Cork, Dublin, Ireland, and Killarney. Green became the favorite color for residences and businesses.

In 1910 the number of Irish born stood at 1,800, and 4,509 Oklahoma residents had one or both parents from Ireland. That year, 202 native Irish lived in Oklahoma City; Muskogee had the second largest number, 48. During this period Irish or first-generation Irish Americans played an integral role in Oklahoma politics. The Oklahoma Socialist Party owed much of its 1910s success to Patrick Nagle's organizational skills and leadership. Frank O'Hare and Dan Hogan also provided guidance to eastern Oklahoma Socialists. Kate Barnard, the state's first commissioner of charities and corrections, devoted her life to social reform. Republican Dennis Flynn had most of his success prior to statehood, serving eight years as territorial delegate to the U.S. House of Representatives. After 1907 he held a leadership position in the then-unpopular Republican Party and in 1908 lost to Thomas P. Gore in a contest for a U.S. Senate seat.

After it became "the Oil Capital of the World," in 1930 Tulsa overtook Oklahoma City for the greatest number of Ireland-born residents, with 155. In 1930 Oklahoma had 972 "Green Isle" natives, but 9,801 residents with one or more Irish parents. Two significant Tulsa oilmen, William Skelly and William Connelly, were of Irish ancestry. Charles O'Connor, Timothy Leahy, Michael McNulty, Pat Malloy, Thomas Lyons, and Thomas Quinn were Tulsa politicians serving on the local and state levels.

The Irish differ from many of the state's immigrant groups in that they rapidly blended into the population, with most marrying Americans. Throughout the rest of the twentieth century the number of immigrants and first-generation Irish trended downward. In 1970 the state had 491 residents born in Ireland and 2,093 with one or both parents born there. In 2000 more than 10 percent of Oklahomans labeled themselves of Irish ancestry, which closely correlated to the percentage of Americans who claimed the same.

The following (as per The Chicago Manual of Style, 17th edition) is the preferred citation for articles:
Larry O'Dell, “Irish,” The Encyclopedia of Oklahoma History and Culture, https://www.okhistory.org/publications/enc/entry.php?entry=IR001.