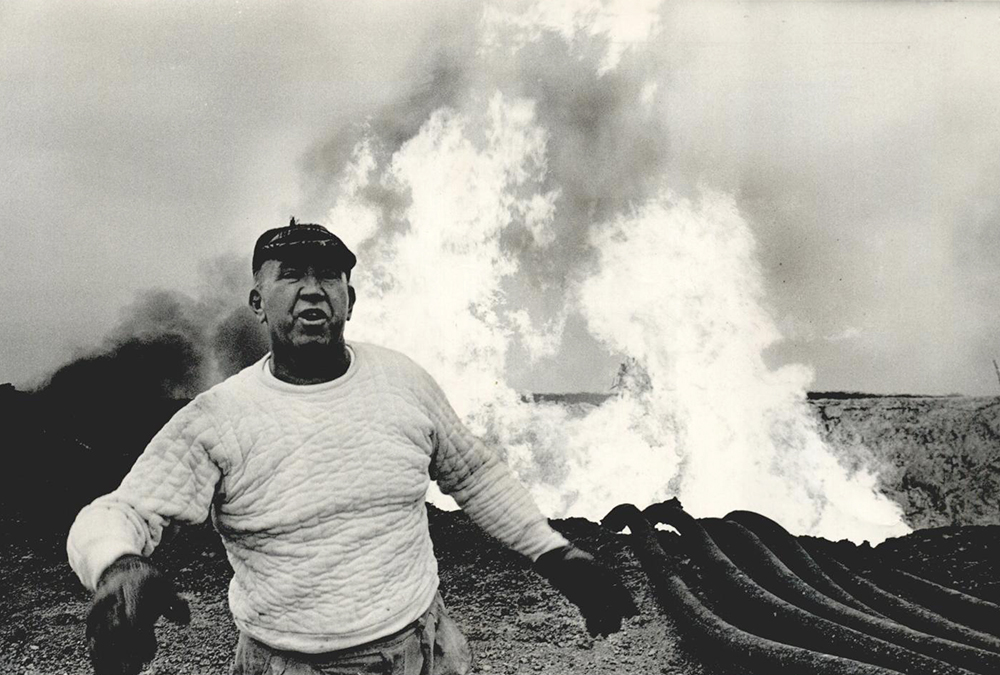 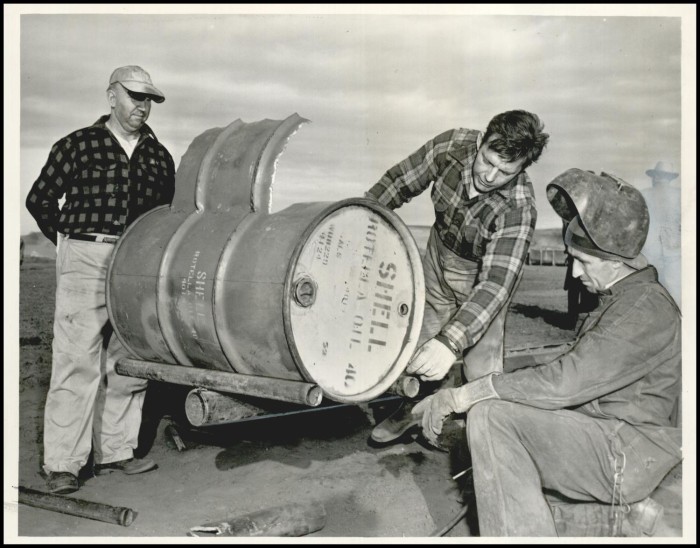 Myron Kinley has been hailed as the grandfather of modern oil-well fire fighting. The eldest of the three children of Karl T. and Katherine Rose Kinley, he was born on November 2, 1898, at Santa Barbara, California. When he was a toddler, the family moved to Bakersfield where the elder Kinley began work in the oilfields as a well shooter. Katherine Kinley died in 1910, and the children went to a foster home. Two years later Myron ran away to work in the oilfields with his father. In 1913 he witnessed Ford Alexander try a new, untested technique of igniting explosives to extinguish an oil-well fire.

Kinley served in the U.S. Army in World War I until March 19, 1919, and then returned to the well-shooting business in Bakersfield. Soon he joined the team that helped Ford Alexander use explosives to shoot out the second well fire in California by that method. The twenty-year-old soon decided that the Oklahoma oil boom offered more opportunity. Moving to Tulsa, he partnered with John Percival in the Western Torpedo Company to shoot wells for fracking purposes. It went bankrupt, and Kinley and William J. (Billy) Donnell formed the Standard Torpedo Company. Donnell left in 1923, and Kinley persuaded his younger brother, Floyd, to join him in Tulsa. On June 2, 1926, Kinley changed the firm's name to M. M. Kinley Company, which the brothers operated for the rest of their working lives.

Early in 1924 the Kinleys shot out their first oil-well fire for H. F. Wilcox in the Cromwell Field. They persuaded Wilcox to use the new and largely untried explosive method, an event that changed their careers. M. M. Kinley Company gradually evolved from well shooting to oil-well fire extinguishing. By 1929 they had gained the reputation as the best oil-well fire-fighting firm in the Mid-Continent region.

During that period Myron Kinley pioneered the use of asbestos fire-fighting suits in conjunction with Johns-Manville Corporation. In May 1931 he suffered the first of many severe injuries when a piece of equipment crushed his ankle. As a result, he devised a water-cooled pipe boom, which he called a hook, allowing the shooter to stand far back from the fire while placing the nitroglycerin charge. With various improvements, the hook remains a standard oil-well fire-fighting device.

In mid-1931 Kinley traveled to Romania, in Europe, to observe the two-year-old Moreni Number 160 fire, considered impossible to extinguish. It had created a crater 250 feet across and 65 feet deep. Kinley's team tried various techniques, killed the fire, capped the well, and captured world headlines, and Kinley became a celebrity. The event focused his company on the art of wild-well control.

Kinley Company's success in Romania brought international expansion. In 1935 Myron moved to Houston, Texas, to be closer to the clearinghouse for foreign work; Floyd remained in Tulsa to manage the United States–based projects. The move placed Myron Kinley closer to manufacturing and marketing facilities for his patented oil-well control devices.

Hired in 1936 to extinguish a well fire burning in Lake Maracaibo in Venezuela, the Kinleys developed another new technique. Myron erected a derrick six hundred feet from the burning well and drilled a slant-hole well that intercepted the burning well's casing deep beneath the surface. He then pumped drilling mud into the well bore, killing the gas pressure and putting out the fire. This use of directional drilling, a nearly new procedure, provided a novel and radical solution to wild-well control.

Danger and tragedy were always a part of Myron Kinley's life. In 1936 a premature nitroglycerin explosion severely damaged his right side and leg, leaving him a permanent limp and partial paralysis. In March 1938 Floyd Kinley was killed by falling rig debris. Myron Kinley's day of reckoning came in 1945 in Venezuela when a burst of gas ignited, engulfed him and his crew, and severely burned and scalded him. The episode changed his life.

In 1946 Kinley he hired his son, Jack, to manage sales, patents, tool development, and marketing for the M. M. Kinley Company. He also hired Paul "Red" Adair as a fire fighter. Over the next several years Adair, with Asger "Boots" Hansen and Edward "Coots" Matthews, assumed an increasing role in the fire-fighting part of the business. In 1950 Kinley briefly retired and in 1951 sold the company's well-control equipment-manufacturing arm to Jack, who changed the name to the J. C. Kinley Company. Myron Kinley retained control of the fire-fighting operations in the Middle East, Japan, and Latin America.

On January 17, 1957, his wife died, and on November 2, 1958, he married Jessie Dearing of Chickasha, Oklahoma. Relocating to Oklahoma, he worked until 1960 and retired. He came out of retirement in 1965 at the age of sixty-seven to extinguish a fire near Canton, Oklahoma, as a favor to a friend.

Myron Macy Kinley died on May 12, 1978, and was buried at Chickasha. He was almost totally deaf, his back was scarred with burn tissue, and he was partially paralyzed from a lifetime in one of the world's most dangerous jobs. His inventions and wild-well control techniques were immortalized by legendary oil-well fire-fighters "Red" Adair, "Coots" Matthews, and "Boots" Hansen, whom he had trained.

The following (as per The Chicago Manual of Style, 17th edition) is the preferred citation for articles:
Bobby D. Weaver, “Kinley, Myron Macy,” The Encyclopedia of Oklahoma History and Culture, https://www.okhistory.org/publications/enc/entry.php?entry=KI023.