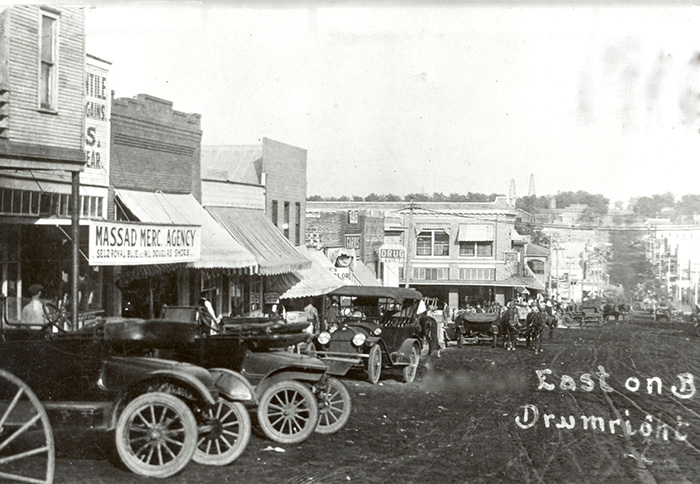 In 1944 the U.S. Navy designated a destroyer escort the USS Naifeh in honor of an Arab-American Oklahoman, Lt. Alfred Naifeh, who was a naval hero. Americans of Middle East origin may constitute a small percentage of the total U.S. population, but like Lt. Naifeh have produced a number of persons who have served their adopted country well. Prominent Arab Americans include names such as Oklahoman Gen. Ernest Masaad, Gen. George Joulwan, who served as North Atlantic Treaty Organization (NATO) Supreme Allied Commander in Europe, John H. Sunnunu, White House Chief of Staff under Pres. George Bush, Sr., and Helen Thomas, journalist, of the White House Press Corps.

"Middle East" is a relatively new term denoting a huge region washed by the Mediterranean Sea and the Persian Gulf. It includes North Africa and Western Asia, an area once called the "Near East." It includes the Arabian Peninsula, Turkey, Iran, Iraq, Syria, Lebanon, and Jordan. The first Arab Americans, called "Turks" because they emigrated from the Ottoman Empire, arrived in the United States in the nineteenth century. The Ottomans did not treat non-Muslims equally, particularly Christians, a few of whom then left Syria for America in the 1860s. Immigration peaked in 1888–1914 when more than one hundred thousand men and women left for the United States. Most were farmers and artisans from the Mount Lebanon district of Syria (now part of Lebanon). At the end of the twentieth century field studies were made of Arab Americans in New York, Michigan, California, and Ohio, but no similar studies have been made of Oklahoma because of its comparatively small Arab American population.

No one knows when the first Middle Easterner came to the United States. It is a logical assumption that the first arrivals settled the Eastern Seaboard then gradually spread out to the Midwest, the South, and the West. Adele Younis studied Middle East immigration in her book, The Coming of the Arabic-Speaking People of the United States (1995). She reported that Syrian Jews from Aleppo, Syria, were early residents of Rhode Island and that there were Arab slaves and freedom fighters in America. There is also the documented case of Father Flavianos Kfoury of the Malekite Catholic Church of Shawayer, Lebanon, who in 1848 came to the United States to collect donations to build St. John's Convent in Khounshara, Lebanon.

Arabs participated in three world expositions held in the United States. Arab merchants may have been influenced to participate by stories they heard from American missionaries. The Philadelphia Exhibition of 1876 attracted Egyptian, Tunisian, Turkish, and Moroccan businessmen. Arab exhibitors won many awards and introduced Americans to the creativity and beauty of Arab wares. Middle Easteners also took part in the 1893 World's Colombian Exposition of Chicago and the 1904 St. Louis Exposition. At the St. Louis Exposition the ice cream cone was born, introduced by a Syrian merchant. Egyptian and Syrian exhibitors reproduced street scenes of Cairo, Damascus, and the Holy Places, and districts heavily settled by Arabic speaking immigrants came to be known as "Little Syria."

Middle Easterners left their homes for various reasons. Some left because they were enamored with America. Others were driven away from their native countries by poverty or by ruthless Ottoman rule. Others refused to serve in the Ottoman Army, and yet others were fearful because of a series of interdenominational massacres. By the beginning of the World War I about nine thousand were immigrating every year. Some boarded ships at the Levant ports and sailed to the United States. There some served under the peonage system, but others worked as peddlers. The more they peddled, the more English they learned, and the more successful they became. Those on the East Coast soon became wholesalers and sponsored the newcomers, sending them inland to peddle their goods.

The new immigrants faced an identity problem. The U.S. immigration authorities denied them citizenship on the ground that they were Asiatic, and federal law banned the naturalization of "Mongolians." When an Arab man named Shishim was denied citizenship in California, he went to court and argued that if he were Mongolian, then Jesus Christ must also have been Mongolian. On November 5, 1909, Judge Frank Hutton of Los Angeles ruled that Middle Easterners were of the white race and could acquire citizenship.

Middle Easterners began coming to Oklahoma in the late nineteenth century. In Indian Territory's mining towns a few enterprising individuals opened stores. For instance, in Krebs a dry goods merchant named Alexi Bayrouth supplied peddlers, who traveled around the territory selling their wares. A hundred "Syrians" were identified in the 1900 census of Oklahoma and Indian territories. Most made their living in various kinds of retail and wholesale businesses.

The early Middle Eastern immigrants who settled Oklahoma came mainly from Jediedat Marjeoun (Judaidet Marjayoun), a small town in southeastern Lebanon. In the 1890s many settled in Oklahoma City and Tulsa. According to a 1939 Syrian Directory of Oklahoma City, the city's first Syrians were Alexander Nader and A. S. Kouri, who arrived in 1895. These "Syrian-Lebanese," as they came to be called, also relocated to smaller communities such as Elk City, Henyretta, Stroud, and Oilton. In 1896, for instance, Joseph Abraham immigrated from Badoon, Syria, at age twenty and settled in Guthrie. He worked as a peddler, opened a store in Chandler, and in 1904 moved to Bristow and went into the oil business. Others began farming, many in western Oklahoma in Woods and Greer counties. Twenty miles south of Alva, nine families from Damascus had established a small farming colony by 1899.

The population continued to grow. In 1910 the census identified more than two hundred Oklahomans as being of "Syrian-Lebanese" birth. By 1920 the number of foreign-born Syrians had risen to 671, spread out all around the state in forty-two of Oklahoma's seventy-seven counties. The largest numbers, a total of 402, were in Creek, Oklahoma, Greer, Pittsburg, Okmulgee, Muskogee, and Tulsa counties.

One of the early settlers was Dr. Michael Shadid, who introduced managed care to Elk City. In his book Crusading Doctor Shadid detailed his experiences as an Oklahoma peddler, a soldier, and a doctor. Describing his home in Lebanon, he wrote that it was a one-room house, which the family shared with the animals. It had no furniture, chairs, or table, no running water, and only a primitive outhouse for a toilet. Shadid settled in Oklahoma, joining his mother and sister. This constituted a clear pattern. The first immigrants would in time sponsor their relatives, and in this way they would begin to form their own small communities. Arab Americans are identified by their family and by the Oklahoma town where they settled. This is the case of the Massads, the Hamras, the Jabaras, the Homsys, the Naifehs, the Shadids, and so on.

After World War II immigration was marked by an increase in the number of highly educated Middle Easterners from a variety of nations. Many came as students, married Oklahomans, and settled in the state, while others were refugees escaping turmoil in their native countries. The early immigrants had been, on the whole, Christian, but the new immigrants were both Christian and Muslim. This growing Arab American community developed its own churches and mosques, restaurants, and in some towns its own schools. The 1980 census recorded 656 Oklahomans born in Lebanon, 3,193 in Iran, and 224 in Turkey; most had immigrated between 1975 and 1980. In the 1990 census 6,906 Oklahomans claimed Arab ancestry.

Middle Eastern immigrants, whether old or new, have served their adopted country in all walks of life. They served with valor and distinction in America's wars, in politics, and the professions. Oklahoma produced many proud names such as Gen. Mike Massad of Ardmore, B. D. Eddie of Oklahoma City, and Dr. Nazih Zuhdi of Oklahoma City, who introduced heart surgery to Oklahoma.

Gregory Orfalea, Before The Flames: A Quest for the History of Arab Americans (Austin: University of Texas Press, 1988).

Adele L. Younis, The Coming of the Arabic-Speaking People to the U.S. (New York: Center for Migration Studies, 1995).

The following (as per The Chicago Manual of Style, 17th edition) is the preferred citation for articles:
Raymond Habiby, “Middle Easterners,” The Encyclopedia of Oklahoma History and Culture, https://www.okhistory.org/publications/enc/entry.php?entry=MI007.