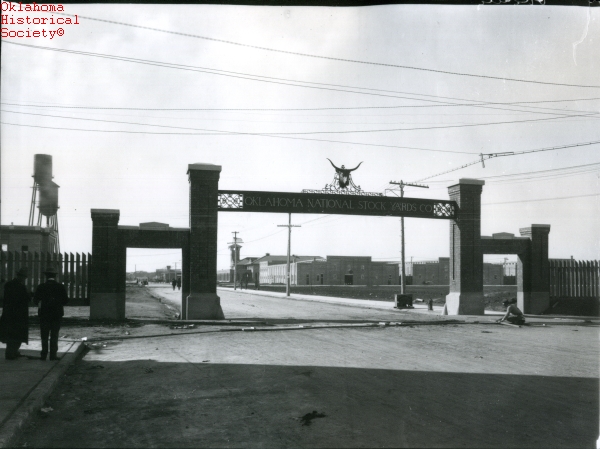 Livestock marketing became Oklahoma City's first major industry when stockyards and meat-packing plants opened in October 1910 on a site west of the twenty-one-year-old city's downtown area. Oklahoma City Chamber of Commerce officials wanted to add their city to others that prospered with stockyards. Consequently, the chamber's president, Sidney Brock, sent letters to several of the nation's biggest meat- packing enterprises, and Thomas E. Wilson, executive vice president of the Nelson Morris Company, arrived to look over prospects in person. Wilson wanted a $300,000 bonus, a five-year tax exemption, sewer and streetcar lines, a belt railroad, and land adjacent to downtown and to the North Canadian River. The city fathers agreed. Several months later a second major packer, Schwarzchild and Sulzberger, came under similar terms. Armour and Company later built a plant.

Morris interests immediately constructed the Oklahoma National Stockyards and the Oklahoma Stockyards National Bank and began selling town lots for $150 to $300 each. The market soon employed more than four thousand people, attracted seventeen commission firms, and created a livestock exchange. As occurred at most stockyards, local entrepreneurs constructed a coliseum in 1922 for stock shows, rodeos, and Future Farmers of America events. Promoters soon rebuilt after it burned in 1930. (The Stockyards Coliseum was razed in 1962.)

Transportation became a key factor in the Oklahoma City's facility's growth. In the beginning railroads provided the major means for farmers and ranchers to take livestock to market, but at mid-twentieth century rail transport declined. Oklahoma National Stockyards personnel realized their fortunate central location for motor-truck travel. By the 1930s farmers began to transport their cattle to market in greater numbers by pickup truck. U.S. Highways 66 and 77 developed nearby.

The Oklahoma National Stockyards emerged by 1950 as a major market for stocker and feeder cattle. When meat packers began closing plants in the 1960s and 1970s, the operations were not affected as adversely as were those of other major stockyards around the nation. Following a nationwide trend, Oklahoma National Stockyards in 1961 added a cattle auction and in 1973 began a hog auction. In 1968 a Delaware-chartered corporation took control and made improvements that included metal pens, a new dock, and a new loading chute.

Centered between a cow-calf area to the east and south and a stocker-feeder grain region to the west, by the 1970s Oklahoma had become the nation's third largest calf-producing state. By 1980 seventy percent of farm income came from livestock. Consequently, cattle and calf receipts did not decrease as rapidly as receipts in many other markets. As a result, by the early 1980s the Oklahoma City stockyards emerged as the nation's number one cattle market, tallying receipts of a million animals per year.

Rob Fisher, fifth president of the Oklahoma stockyards, guided the company into the twenty-first century as the largest stocker-feeder cattle market. Approximately one-half million animals still continued to arrive per year. Nine commission companies still operated, but 99 percent of sales were by auction. The Oklahoma National Stockyards remained as one of half a dozen large stockyards in the United States (from more than two dozen originally) that survived to the twenty-first century. Most closed because of direct purchases made at feedlots or by video sales. Oklahoma City enjoys tourist development in its "Stockyards City" area.

The following (as per The Chicago Manual of Style, 17th edition) is the preferred citation for articles:
J'Nell L. Pate, “Oklahoma National Stockyards,” The Encyclopedia of Oklahoma History and Culture, https://www.okhistory.org/publications/enc/entry.php?entry=OK067.