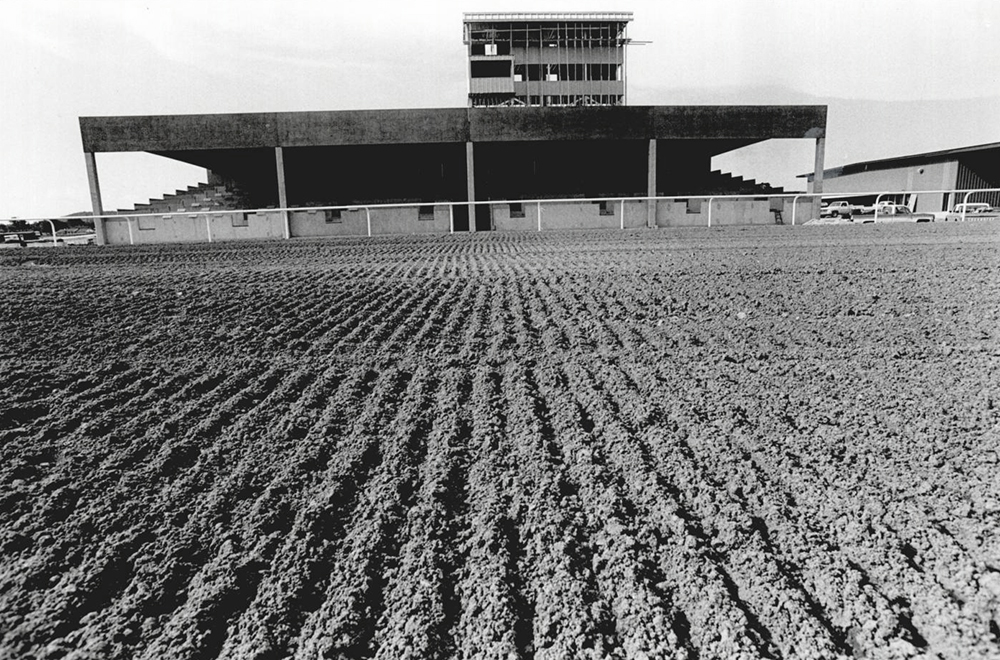 A significant economic activity in Oklahoma for two centuries, horse racing (a competition between running horses) has always been popular. Racing events historically have included "driving" or "harness" events (a pacing or trotting horse pulling a sulky with a driver) as well as "flat" (rider-astride-galloping horse), also called "speed" or "running" racing. Either could be a simple contest that matches two horses to see which is faster, or a more complicated event involving distance and time. In the first quarter of the twentieth century harness racing (Standardbred horses) predominated at the larger tracks, but Thoroughbred match races, as well as dog races, took place. Around the time of World War I Thoroughbred flat racing took precedence. After World War II Quarter Horse racing added to the mix of racing meets, and Oklahoma became a national center for Quarter Horse breeding and race training.

Most of the Native peoples in future Oklahoma practiced racing both as training for life and as a sport. Interviews and memoirs of Indian Territory by both Native and white attest that racing horses was the most popular sport of the nineteenth century. During the Territorial Era private matches or race meets frequently occurred. Notable racetracks appeared at Parris Prairie near Westville, at Muskogee, Checotah, Fairland, Stilwell, and Yorktown. Sources indicate that in 1899 the Yorktown track offered races every week. Smaller venues' tracks might be straight, or just a country road. Others were more elaborate, such as the one erected in 1910 at Muskogee, a one-mile-oval facility that hosted both Standardbred harness and Thoroughbred flat races.

In the late nineteenth and early twentieth centuries races were well-organized entertainment venues. Owners of trotting, pacing, and running horses formed "driving clubs" and "racing associations" and traveled in a circuit of towns. In 1900 one such organization kept a circuit at Oklahoma City, El Reno, Guthrie, Perry, Enid, Hennessey, and Newkirk. A well-documented circuit operated in western Oklahoma towns and into Texas. Oklahoma-Kansas Circuit and Horse Breeders Association operated in towns in those three states, and the Texas Thoroughbred Racing Association's Southern Racing Circuit included Oklahoma City with Houston, Fort Worth, and other Texas venues. Spring, summer, autumn, and holiday meets were held, usually not in association with fairs. Racing's attraction continued into the early statehood years, and almost all local, county, and state fairs, usually held in the autumn around harvest time, advertised a racing card. It was a major event that drew huge crowds. City governments of Oklahoma City, Muskogee, Tulsa, and other towns invested considerable money in tracks, barns, and grandstands, and private amusement parks, including Delmar Garden (Oklahoma City) and Kramer Park (Oklahoma City) did likewise.

Throughout these decades money almost always changed hands at racing venues. A day's card usually comprised six races offering purses for the winners and might include harness racing, or flat racing, or both. Oklahoma City's summer race meet brought horsemen from surrounding states and from further away to compete with local driving clubs and breeders' clubs. Gambling was not illegal in the Indian nations, Oklahoma Territory, or early statehood Oklahoma. In the early 1900s wagering was ubiquitous at the tracks, and bookmakers, or "bookies," proliferated and openly operated. In fact, in an effort to put them out of business, in 1912 pari-mutuel machines were installed under the grandstand at the Oklahoma State Fair in Oklahoma City. In addition to these gambling methods, spectators and horse owners often made private bets.

From the 1890s through the 1910s Progressive reformers railed against the practice of wagering, using the arguments that racing attracted an unsavory crowd to public events, that it was just a vehicle to entice people to gamble, that it provided a gateway for the corruption of impressionable youth who attended fairs. In 1909 and 1911, the legislatures of California and New York outlawed wagering and bookmaking; other states followed suit. In Senate Bill 1935 (to be effective October 1913), "the Anti-Racetrack Gaming Law," Oklahoma's solons outlawed bookmaking, betting pools, and mutuels "on the result of any trial of speed or power of endurance of animals," but racing was not specifically outlawed. A repeal movement immediately began; a petition circulated, gathered more than 16,000 signatures, and was declared valid in mid-September 1913. Meanwhile, interpreting the law to prohibit not only betting but also the very act of racing, in September 1913 the local district attorney forced the State Fair Association in Oklahoma City to cancel the summer meet in Oklahoma City. State Question 61, to repeal the law against racetrack wagering, appeared on the primary election ballot in August 1914, and the public voted two-to-one in support of the law. Subsequently, Gov. Lee Cruce sent the National Guard to stop the dog races at the Tulsa State Fair in the autumn of 1914; in a resulting lawsuit, in 1915 the Anti-Racetrack Gaming Law was upheld in district court.

The frequency of horse racing meets declined for a year or so after the referendum, but the sport quickly recovered, due in part to a newspaper campaign reminding Oklahomans of the economic benefits of Thoroughbred horse breeding and racing. Wagering, it seemed, had been relegated to discreet side bets or secret off-track betting parlors. In 1915 at least a dozen well-publicized race meets occurred throughout the state at city and county fairs, but at the state fairs horses were supplanted by automobile racing. In 1915 and 1916, respectively, the Muskogee State Fair and Oklahoma State Fair horse races resumed.

Horse racing surged after World War I, with meets on holidays, at local fairs, and at the State Fairs. With a booming economy and frenzied spending in the 1920s, the sport continued to grow; despite a national economic depression in the 1930s it continued as a popular diversion. "Brush" or "bush" circuits included regularly held races and a "stable" of jockeys available to ride. Several regional racetracks bloomed during the 1920s and 1930s and took off after World War II. Appearing first circa 1903, In Dewey County, Seiling's "Little Louisville" started as a Quarter Horse speed track with frequent matches, and its annual summer Standardbred harness races never ceased to be popular with horsemen and spectators. By 1938 the Seiling Race Association had constructed an oval half-mile running track with grandstands and a starting gate, and a new track was developed in 1948. Also competing there were the Oklahoma Racing Association, a circuit of fourteen towns. The venue lasted into the 1950s and was typical of towns such as Claremore, Newkirk, Pawhuska, Clinton, and Enid, which invested heavily in professional tracks, stables, and grandstands.

The economic importance of racing grew rapidly after World War II as the racehorse-breeding and -training industry developed. Racing venues provided valuable training opportunities for horses that might be raced in other states where purses were larger and wagering was legal. In the 1940s and 1950s circuit racing included both Thoroughbred and Quarter Horses. One of the major circuits included Ponca City, Newkirk, Pawhuska, Fairfax, Pond Creek, and Enid. Another, set up during World War II by the Oklahoma-Kansas Thoroughbred Racing Association, met in Oklahoma at Clinton, Kingfisher, Pond Creek, Seiling, Fairview, Taloga, and Woodward and Eureka, Anthony, and Wichita, Kansas. Another took in Newkirk, Vinita, Woodward, Miami, and Ponca City and Ruidoso and Raton, New Mexico. Gambling was still illegal. Publicly accessible training tracks (licensed, non-betting) have included facilities at Blue Ribbon Downs at Sallisaw, Garfield Downs at Enid, Midway Downs in Stroud, Will Rogers Downs at Claremore, and Ross Meadows at Ada and several others.

The Oklahoma Horse Racing Act, passed in 1982, became effective in 1983. That legislation permitted pari-mutuel wagering at tracks officially licensed by the Oklahoma Horse Racing Commission. Blue Ribbon Downs (Sallisaw), established in the 1960s, became the state's first pari-mutuel facility and concentrated on Quarter Horse racing. It became the state's first "racino" by offering casino gaming in 2005. Financial problems caused it to close in November 2009, but by 2015 it was back in service as a training track.

By 1993 horse racing had a direct economic impact of more than $51 million to the state's economy and employed 5,547 individuals. A decade later, according to a 2013 study of Oklahoma's equine industry, the racing's direct impact had grown to $223 million, with 6,450 individuals employed throughout the racing segment. The state was home to 14,000 race horses and 800 breeding horses. In 2005 the Oklahoma Legislature enacted a measure that used gaming taxes to fund part of the state's education budget.

In 2015 three pari-mutuel tracks continued to operate in the state. Remington Park (Oklahoma City) has offered Thoroughbred in the fall events and Quarter, Appaloosa, and Paint in the spring events. At Fair Meadows (Tulsa), Quarter Horses, Appaloosas, and Paint Horses compete. Will Rogers Downs (Claremore) has presented both Quarter Horse and Thoroughbred racing.

Diane B. Haser-Harris, "Horse Racing in Early Oklahoma," The Chronicles of Oklahoma 64 (Spring 1986).

The following (as per The Chicago Manual of Style, 17th edition) is the preferred citation for articles:
Dianna Everett, “Horse Racing,” The Encyclopedia of Oklahoma History and Culture, https://www.okhistory.org/publications/enc/entry.php?entry=HO046.