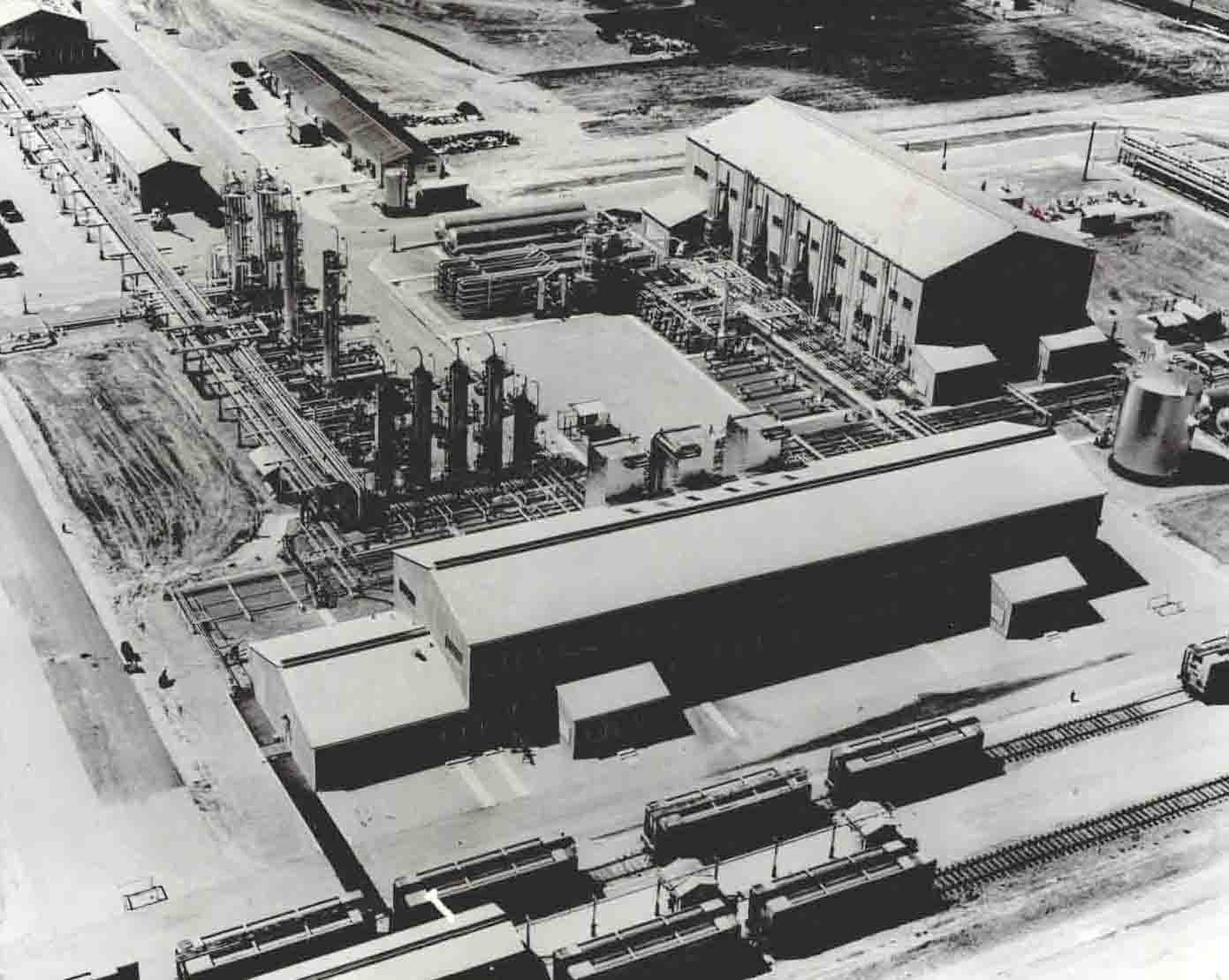 The helium extraction plant at Keyes, Oklahoma, in the Panhandle in Cimarron County northeast of Boise City, is one of a few in the United States and the only one in Oklahoma. The perception that helium is used primarily to fill party balloons is in error. Class A refined helium that is crucial to a variety of endeavors, including atomic energy, medicine, missile technology, shield-arc welding, and low-temperature physics technology.

The element helium (He), a non-renewable resource, makes up about .0005 percent of planet Earth's atmosphere. When radioactive elements in the crust decay, they produce helium, but it is not gravitationally bound to the planet and does not accumulate in the atmosphere. An inert gas, helium does not combine easily with other elements. No known compounds contain the element, and the only viable source of commercial quantities of helium is that trapped within natural gas deposits.

In 1868 astronomers first observed and identified helium as an unknown band of gas surrounding the sun. In 1895 the element was proven to exist on Earth. Over the years helium was found to be widely distributed across the planet in minute quantities and was considered little more than a scientific curiosity. That changed in 1905 with the investigation of a natural gas well at Dexter, Kansas.

Gas in the Kansas well contained an unusually high level of noncombustibles that interfered with its being marketable as a fuel. The situation prompted the state geologist to send samples to the University of Kansas, where chemistry professors Hamilton Cady and David McFarland discovered that the sample contained 1.84 percent helium. They expanded their research and identified similar concentrations at various localities throughout the region. Meanwhile, experiments proved that natural gas with helium concentrations in the range of 1 percent or higher made possible the commercial production of helium from natural gas.

Helium became important to national defense during World War I for inflating military balloons and dirigibles. The U.S. Army and Navy initially used the highly explosive element hydrogen. Helium, an inert, nonexplosive gas, was a viable alternative, and responsibility for developing a commercial supply fell to the military. In 1915 the Department of the Army built an experimental helium extraction plant at Petrolia, Texas, near Wichita Falls. Soon the Department of the Navy built two plants near Fort Worth. In 1921 those were dismantled, and the navy opened the nation's first large-scale commercial helium extraction plant, also near Fort Worth. The experimental facilities and the commercial operation used gas from the Petrolia Field, which provided natural gas containing roughly 1 percent helium.

The process for helium extraction has changed little over time. In a two-phase process, natural gas is subjected to high pressures that force it to liquefy. In the first phase, the temperature is lowered to approximately -250° F, causing liquefaction of all gases but helium and nitrogen, which have lower freezing points. The liquefied natural gas that has separated is returned to its gaseous state and sold as fuel. The leftover gaseous mixture, termed crude helium, contains about equal parts helium and nitrogen. In the second phase, the temperature is lowered again, removing the nitrogen from the helium and leaving Class A helium of approximately 98 percent purity.

In 1925 the U.S. Bureau of Mines took over the Fort Worth plant. Soon it was discovered the Petrolia gas field was depleting and would stop producing in a few years. The bureau began to search for another region with helium-rich natural gas. In addition to containing more than 1 percent volume of helium, the new field must provide a sufficient volume of gas to assure long-term viability, have a high rock pressure, be near a natural gas market, and be near transportation facilities.

The Bureau of Mines sampled more than three thousand gas wells, focusing on the vast Hugoton natural gas field that covers most of southwestern Kansas as well as the Texas and Oklahoma panhandles, including the Keyes natural gas field. Practically all of that region contained varying concentrations of helium in its natural gas. By 1926 the federal government settled on the Cliffside structure (or Bush Dome), located in Potter County, Texas, a few miles west and north of Amarillo, bought eighteen acres, broke ground on a new helium extraction plant in August 1928, and closed the Fort Worth plant. Operations at the Cliffside facility began in April 1929.

The advent of World War II and the postwar atomic energy and space programs increased the demand for helium. By the mid-1950s the Cliffside structure was becoming rapidly depleted. As a result, the Helium Acts Amendment of 1960 (Public Law 86-777) allowed the Bureau of Mines to build private plants for helium extraction from natural gas. Five such facilities were built in the helium-rich gas fields of southwestern Kansas and the Texas and Oklahoma panhandles. Included in that region was the Keyes Field. The Bureau of Mines also approved a 425-mile pipeline to act as a gathering system for the new extraction plants. It was built and operated by the Colorado Interstate Gas Company from Bushland, Kansas, to the Cliffside facility.

One of the five plants was constructed at Keyes, Oklahoma. It proved to be a significant economic boon to that small rural community. The Keyes plant went into operation in November 1959; during its first year of production it accounted for 24 percent of the federal government's processed helium. By 1968 it was the Bureau of Land Management's (BLM, successor to the Bureau of Mines) largest plant. Most of the raw helium produced at the plant was shipped by pipeline to the Cliffside facility and injected underground for storage as part of the Federal Helium Reserve. During the 1970s the Keyes Field's supply of natural gas dwindled, and refining it became economically unfeasible. In 1982 the plant was dismantled.

By 1995 more than a billion cubic meters of raw helium had been stored at Cliffside, but the operation had created a debt of $1.4 billion. As a result, Congress passed the Helium Privatization Act of 1996 (Public Law 104-273), directing the BLM to sell the stored material and empty the reserve. That soon paid off the program indebtedness; sales continued in 2018. Under the Helium Privatization Act, Colorado Interstate Gas Company built a new helium refining plant at Keyes. It operates as Keyes Helium Company, refining raw helium from Cliffside into Class A helium for the market. The plant has also refined raw helium imported from Tanzania. In 2018 Keyes was one of twenty-one helium refining facilities in the United States.

Since its opening in 1995 Keyes Helium Company has been owned by a variety of different operators; in 2018 it was the property of Badger Midstream Energy, LLP. Although in the twenty-first century Oklahoma has produced no helium, it is still refined at the Keyes plant. The BLM currently projects that by 2021 the Cliffside helium reserve will be completely depleted. The Keyes plant will have no feed stocks, leaving its viability in question.

Bobby D. Weaver, "Lighter than Air: A History of the Helium Industry in the Permian Basin," Permian Basin Oil and Gas, July 2022.

The following (as per The Chicago Manual of Style, 17th edition) is the preferred citation for articles:
Bobby D. Weaver, “Keyes Helium Extraction Facility,” The Encyclopedia of Oklahoma History and Culture, https://www.okhistory.org/publications/enc/entry.php?entry=KE018.