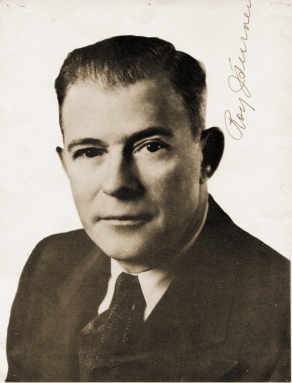 Near Kendrick, Oklahoma, on November 6, 1894, Roy Joseph Turner was born to Reason and Etta Louise Turner. Turner's father, a homesteader and livery stable owner, instilled in his son a commitment to rural life that lasted long after Roy moved to the city. While governor of Oklahoma and after leaving office, Turner sponsored livestock exhibitions and judging contests for 4H Club and Future Farmers of America girls and boys.

After quitting high school, Turner moved to Oklahoma City and attended Hill's Business University, concluding his formal education. Following brief stints as a bookkeeper and a salesman, during World War I he enlisted in the Fifty-sixth Infantry Regiment, Seventh Division of the U.S. Army. After his tour Turner resumed a career in business, investing in Oklahoma, Texas, and Florida real estate until financial reversals almost ruined him. Fortuitously, royalties on his oil-rich land rescued him financially, and in 1933 Turner built Hereford Heaven Ranch near Sulphur.

Turner sought a mate with whom he could enjoy success. After a short-lived first marriage, Turner and Jessica E. Grimm were wed in 1937. The couple adopted twins, Roy W. and Betty. Perhaps fatherhood inspired Turner's first political role as Oklahoma City School Board member in 1939, a post he held for seven years. Then in 1946 he ran for governor against Tulsa Republican Dixie Gilmer, igniting one of the state's most bitter gubernatorial campaigns.

Probably Turner's most recognized gubernatorial feat was the 1947 state legislative bill creating the Turner Turnpike, a major toll road from Oklahoma City to Tulsa. Turner spent much time in Washington to secure Public Roads Administration funds for highway construction. Due to the arduous process of obtaining federal moneys, statewide resistance from rural residents, other motorists, and "bypassed" towns such as Bristow and Stroud, the 1949 legislature barely reinstated the bill. Therefore, construction did not begin until Turner's last year in office.

Turner's continued presence in Washington along with his loyalty to Pres. Harry Truman and the Democratic Party did not go unnoticed. The governor was national president of the Truman-Barkley for President Club. Moreover, when candidate Turner's campaign train ran short of money in Oklahoma, Turner raised enough funds for the future president to complete his journey. Truman later invited Turner to become secretary of agriculture in 1949, an offer the Oklahoman declined.

In keeping with Turner's bucolic roots, the governor's hobby was writing and singing country-western songs. Ironically, objections to the Turner Turnpike by agrarian groups such as the National Grange, and by numerous citizens who feared that school consolidation would eliminate their small districts, eroded Turner's rural support. This may have cost him a U.S. Senate seat in 1954 when he attempted to grasp the Democratic nomination from former governor and nondrinking Baptist Robert S. Kerr, who also favored continuation of state prohibition.

After the defeat Turner returned to the oil and cattle business but sold his oil interests in 1955. Two years later he was inducted into the Oklahoma Hall of Fame. He also served as trustee for the National Cowboy Hall of Fame and Western Heritage Center (now the National Cowboy and Western Heritage Museum) and was state chair of the Crusade for Freedom and the Young Men's Christian Association youth and government program. He remained in the cattle business until 1963 when he sold his ranch to Winthrop Rockefeller. Turner and his wife, Jessica, moved to the Skirvin Hotel in downtown Oklahoma City, where he lived the remainder of his life. He died on June 11, 1973, of a brain tumor.

Courtney A. Vaughn-Roberson, "The Politics of Education and Reform: Henry Garland Bennett in Oklahoma, 1907–1951," History of Higher Education Annual 5 (1985).

The following (as per The Chicago Manual of Style, 17th edition) is the preferred citation for articles:
Courtney A. Vaughn, “Turner, Roy Joseph,” The Encyclopedia of Oklahoma History and Culture, https://www.okhistory.org/publications/enc/entry.php?entry=TU021.