Even though steamboat operation offered many economic opportunities, many challenges also existed. To start with, steamboat operation drastically altered the environment in the West. Steamboats required massive amounts of wood for fuel. A medium-sized steamboat, like Heroine, used anywhere from twenty-four to fifty cords of wood a day. A cord is a unit of measurement used when selling firewood. One cord measures four feet wide by four feet high by eight feet long. The removal of trees along the banks created erosion, washouts in the rivers, and changes in vegetation. The wildlife along western rivers changed as a result of the cutting of trees along the banks. While the environmental impact was huge, people continued to cut down trees to fuel steamboats because it provided them with a source of income. People along the rivers would cut down trees and stack them along the river banks and receive payment from steamboat operators for their product. 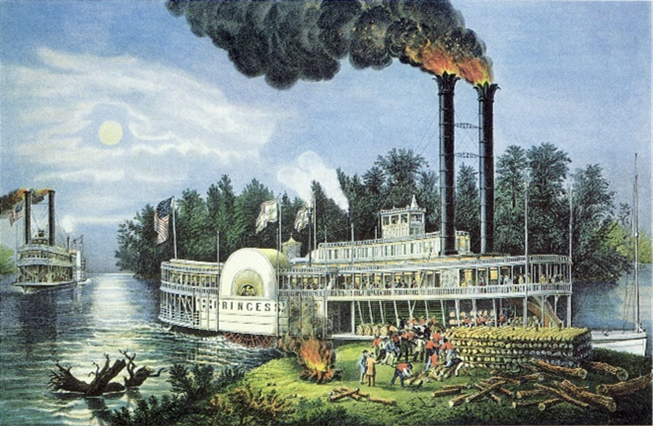 Wooding Up on the Mississippi (image courtesy of National Geographic).

Western steamboat operators also dealt with the challenge of weather and barriers to river navigation. Weather-related challenges included the freezing of the rivers in the winter and the flooding of rivers in the spring and summer. Most steamboats could only operate seasonally, with some only operating four months out of the year. Another challenge for operators involved natural barriers to boat navigation on the rivers. For example, the Great Raft was a tremendous log jam that prevented steamboats from navigating to the various ports on the Red River. In 1836, Henry Shreve began to remove the raft and in 1838 steamboats could navigate through it. The removal of the Red River Raft opened up trade along the Red River and provided new opportunities for steamboats to transport goods to new areas. The removal of the raft allowed Heroine to become a transporter for Fort Towson, supplying the fort with goods and, occasionally, recruits. 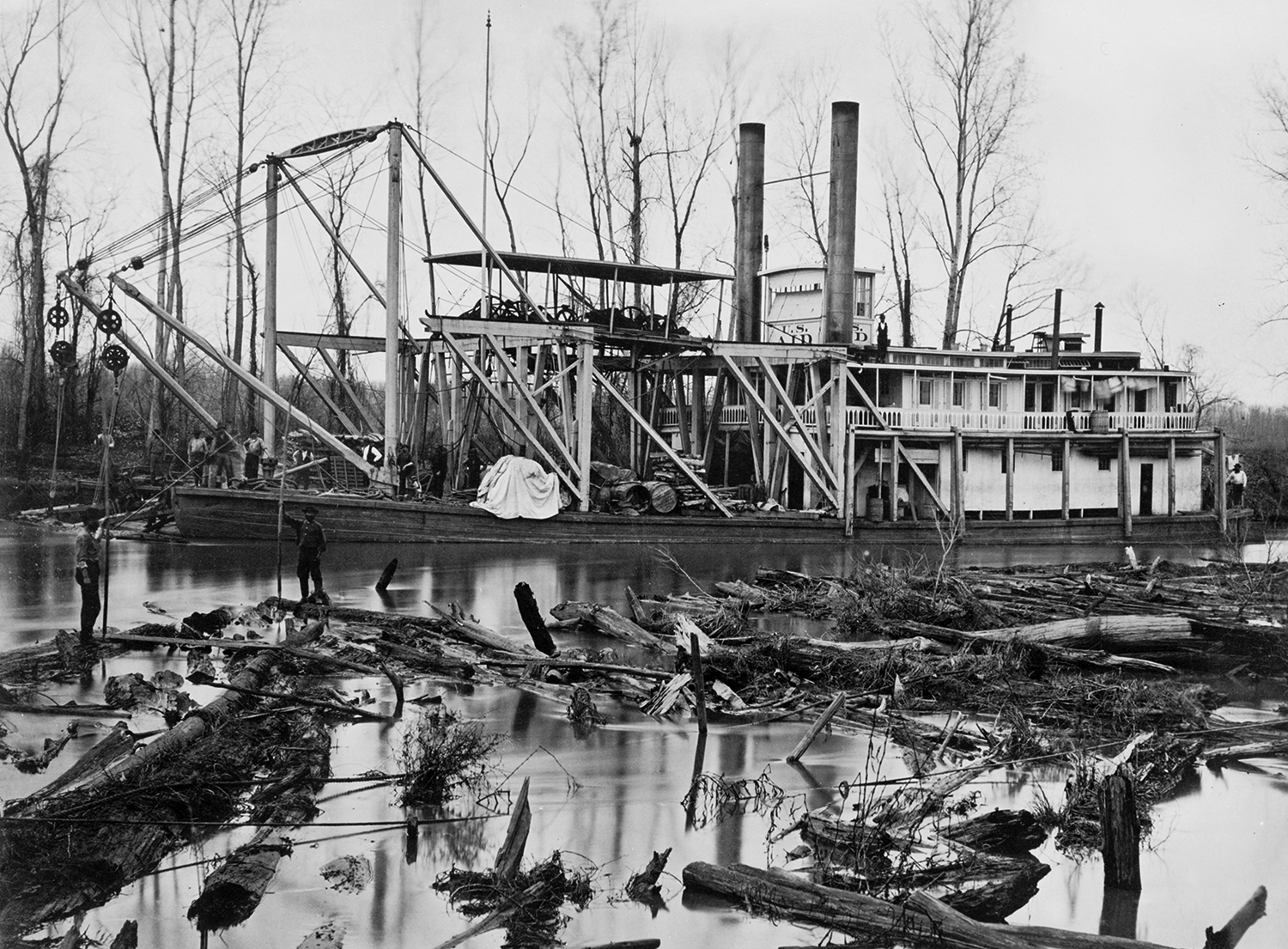 Scenes of the Great Red River Raft (image courtesy of Library of Congress).

Sandbars and rapids also impacted steamboat travel. Rapids often caused travel delays and forced boats to find another route. Weather and barriers contributed extensively to the struggles of steamboat operators, but the most significant challenge for them to overcome was accidents.

Accidents contributed to massive loss of life as well as economic losses for operators, passengers, and crew. Due to the lack of regulations for steamboats, fires, collisions, boiler explosions, and snags happened often. Collisions occurred more frequently in the early 1800s when the western steamboats first emerged. They often happened at night when it was difficult for the crew to see other approaching boats. Collisions caused death and severe financial loss and often caused boats to sink. When a collision happened, many passengers and crew died either from drowning or being crushed upon impact. Eventually, steamboatmen adopted the use of a steamboat bell. The bell was used to signal to other boats on the river to avoid collision.

Fires and boiler explosions were another deadly form of accidents on western steamboats. Steamboat operators favored engineers, those responsible for fueling the boat, who placed the speed of the boat over safety. Therefore, fire and boiler explosions often occurred due to the common practice of steamboat engineers overloading the boiler and the steam engine. They used steam pressures far above the limit that the engines could stand. This caused boilers and engines to explode. Explosions and fires caused loss of life and injuries for steamboat passengers and crew. When an explosion occurred, the scalding hot steam caused injuries and even death. For example, in 1838 the steamboat Moselle exploded, killing 150 of the 280 people on board. The steamboat Heroine experienced boiler failure in 1835, which left several dead and many others severely wounded. Explosions like these got public attention and generated an outcry over the lack of regulation of the steamboat industry.

Snags on western rivers caused the most steamboat accidents. Snags were trees or large branches lodged in the bottom of the riverbed. Snags went largely undetectable because many were disguised under the water. They could only be detected if visible above the water, or if the pilot saw it below the surface. Snags punctured steamboats underneath the water, causing boats to sink. Snags contributed to almost three-fifths of all steamboat accidents. Snags did not contribute to a huge loss of life, as with explosions or fire, but they did often cause financial loss. Boats did not often survive, and freight was usually lost as well. For example, in the 1838 sinking of the Heroine, the crew salvaged some of the freight, but the boat was lost, causing severe financial loss for the operator.

All of the challenges that steamboats experienced contributed to their short lifespans. Steamboats did not often run for more than four years due to the harsh river conditions and accidents. The frequency of accidents made steamboat travel a gamble, but one that people often took. If a steamboat could run for five years or more, it was considered old, its survival rare, and its crew and operators, lucky. The steamboat Heroine ran for five years before sinking in 1838, thus making it a veteran boat and a rare vessel. 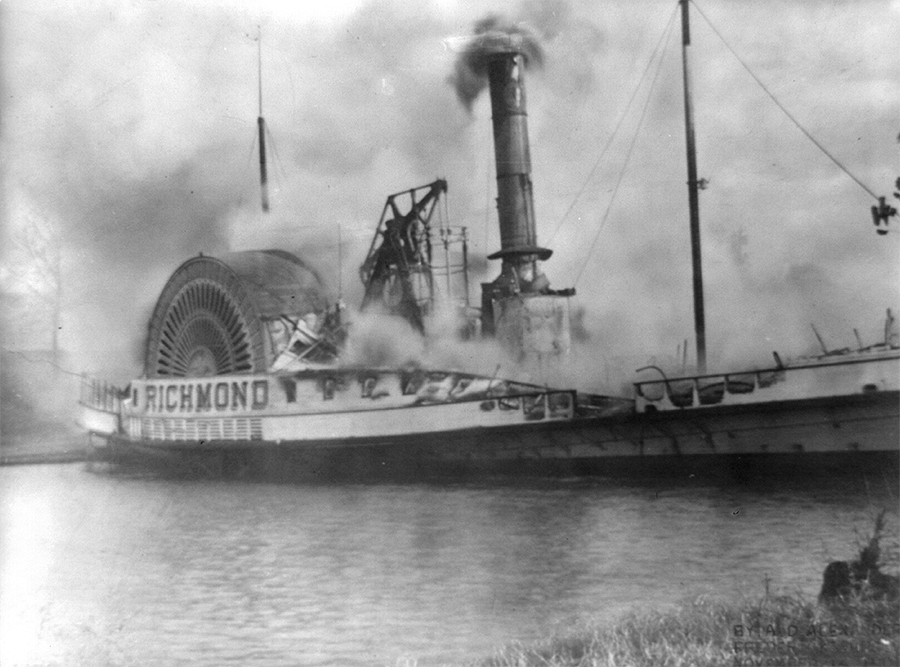 Steamboat Richmond on fire (image courtesy of the Library of Congress).