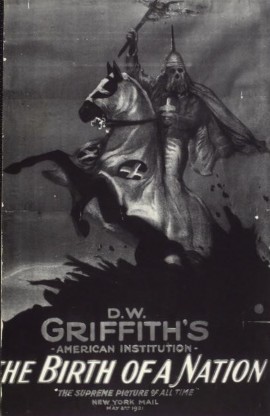 Birth of a Nation promotional poster, 1915. This silent film portrayed African Americans as violent and unintelligent, and the KKK as heroic (image courtesy of the New York Public Library).

White Supremacy
Even after the horrors of World War I, many white Americans continued to believe and enforce the ideas of white superiority. White political leaders embraced this belief system and used their institutional power to further those beliefs. While many whites directed prejudice, discrimination, and violence toward other groups such as Mexican and Chinese immigrants in the early 1900s, the racism of many Americans remained focused on African Americans. The second Ku Klux Klan organized in 1915 with white supremacy as one of their primary beliefs. During the 1920s, the Klan successfully enrolled between 3 and 8 million members (out of a US population of approximately 100 million) who lived not just in the South, but the entire country. As the president, Woodrow Wilson used his executive power to segregate Washington, DC, and limit the already sparse employment of African Americans in the federal government. Prior to this, the district had remained desegregated since the Civil War. White communities expressed fear and resentment, sometimes with violence, against African American soldiers returning from World War I, especially if they were in uniform. Lynching, especially of African Americans in the South, occurred regularly. The eugenics movement provided a scientific-sounding justification for these actions until it fell out of favor following World War II.

Segregation
Jim Crow segregation laws developed from the ideas of white supremacy. At the same time, segregation laws hid African Americans from the daily lives of whites in the same town. Businesses either refused to serve African Americans or offered unequal services. African Americans purchasing food at a diner were not allowed to eat on the premises with whites. In stores, clerks stopped assisting African American customers when white customers entered. Entrances, waiting rooms, and water fountains were segregated. Transportation such as busses or trains required Africans Americans to sit in separate cars or behind whites and give up their seat if it became crowded. Ambulances refused to carry African Americans and hospitals were white only. Most parks were for the exclusive use of whites. African Americans were prevented from serving on juries, and were forced to use separate Bibles when being sworn-in to testify. Without contact and first-hand knowledge, many whites simply accepted the racist presentation of African Americans in magazines, radio programs, minstrel shows, newspapers, and, significantly, the new format of movies. For many African Americans, presenting as compliant in the presence of whites became a survival strategy. Those who did not act the way whites expected them to could be in danger of losing their jobs or facing physical attack. 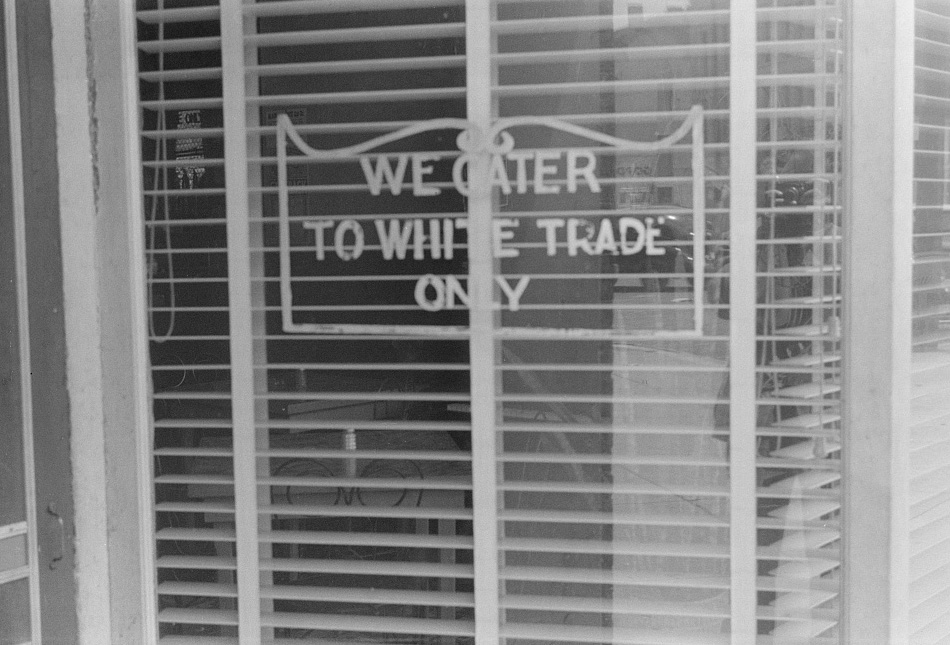 Sign on a restaurant in Lancaster, Ohio (image courtesy of the Library of Congress).

Great Migration
African Americans living in the South faced limits in all aspects of their lives. They confronted the brutality of segregation and the violence that supported it. They experienced a lack of opportunity caused by the sharecropping system and the refusal of other industries to hire African Americans. The widespread infestation of boll weevils that ruined cotton crops throughout the region attacked the livelihoods of both white and African American farmers. These conditions resulted in compelling reasons to leave the South if a family could save up enough money to do so. As the first migrants gained a foothold outside the South, the support they could offer convinced others to make the journey. Incredible numbers of African Americans moved permanently away from the South beginning in the 1890s and continuing into the 1970s. Oklahoma’s initial appeal to African Americans from other states came in the early 1900s because of their eligibility to gain, potentially, a homestead in the land runs. The existence of many All-Black towns convinced some to come to Oklahoma and the oil boom brought others. For many whites in places that lacked an African American presence, racist assumptions prevailed. Once the environment integrated, the whites of the area perceived their new neighbors negatively, which reinforced stereotypes and a sense of superiority. Many whites viewed newly arrived African Americans as competitors for jobs, housing, and resources, which created even more racial tension. 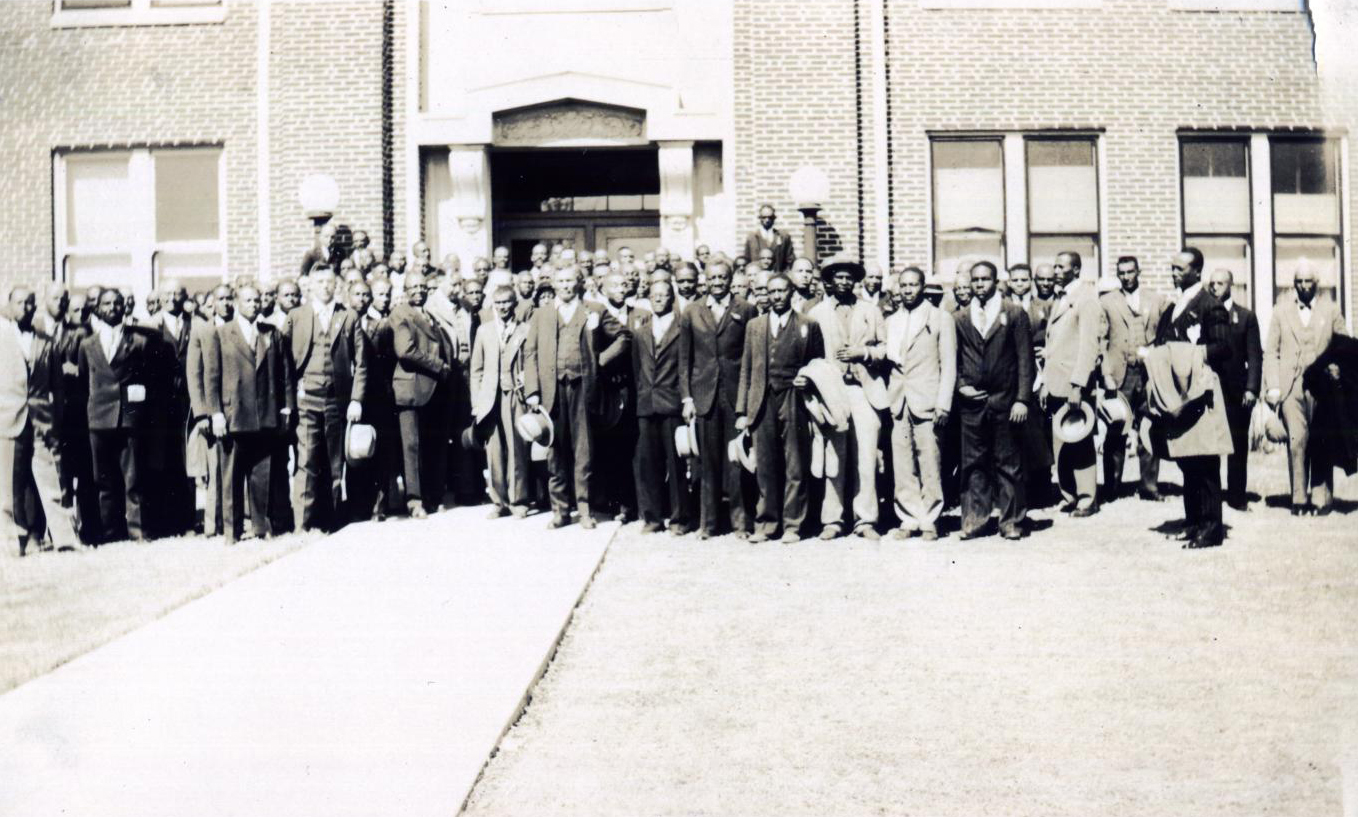 Rapid Urbanization
Some of those whites witnessing the Great Migration were migrants as well. Increasingly, the best opportunities existed in the cities. War-related jobs and the agricultural depression after the war led to the movement of people from all backgrounds to cities in the North and the Midwest, like Detroit, Chicago, Cleveland, and Tulsa. This process could be extremely disorienting, especially as the country underwent several abrupt cultural transformations at the same time, including an increase in secularism, changes in how women lived, the growth of illegal drinking establishments, and the automobile’s transformation of society. Just as in Tulsa, the cities’, populations skyrocketed in very short periods. This created challenges in fulfilling the food, housing, employment, and safety need of new residents.

Lynching
During the late nineteenth and early twentieth century, a form of community violence called lynching served as a tactic to enforce Jim Crow segregation and inequality. Lynching is the killing of a person by a mob without any legal trial. In many places, communities lynched individuals for alleged crimes and union organizing. In the South, communities increasingly used lynching as a way to instill terror in the African American population. In the 1880s, four African Americans were lynched to every one white person. After 1900, the ratio increases to 17 African American victims for every one white person.

A frequent “reason” for lynching an African American man was sexual contact with a white woman. This included allegations of rape, sexual assault, and consensual relationships. For African Americans in Oklahoma, it was understood that white communities practiced lynching, and the likelihood of mob violence increased dramatically if an allegation of sexual contact with a white woman occurred.

A mob lynched Edward Berry on August 6, 1915, after he was arrested for assaulting a white woman. This headline is from the Colony Courier (Colony, Oklahoma).