The World-Sun have at least 500 subscribers among the Negroes of this city, which amounts to $3,900.00 per year. Quite a fat sum to pay to be insulted and outraged at frequent intervals, eh?...A paper which will not publish their social news, but take a keen delight in publishing any article calculated to discredit the Negro in any way and to stir up prejudice against him.

This media bias exposed whites in Tulsa to the consistent message that African Americans were to blame for crime. When white Tulsans tried to understand what happened during the race riots, and why, this bias would impact the way the city leaders and residents made decisions. 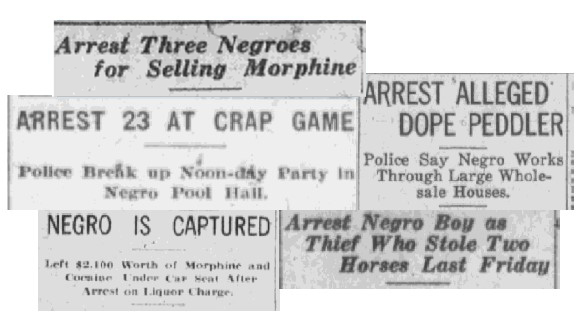 The Belton Lynching
In the summer of 1920, a year before the massacre, two men and a woman robbed and shot a taxi driver they had hired to take them to a dance. While in the hospital, the taxi driver identified Roy Belton as one of the attackers. The story spread quickly through Tulsa, and when the taxi driver died from the wound, a mob converged on the courthouse jail. They demanded Belton be handed over. The mob, which numbered in the hundreds, drove Belton out of town and hanged him from a tree. After the incident, the chief of police and the sheriff expressed gratitude to the mob for making criminals think twice. Both the Tribune and the World applauded the actions of the mob as superior to government action. The World predicted that Belton’s lynching “will not be the last by any means.” Although Belton was white, the African American community viewed this killing with grave concern.

The lynching of Belton in Tulsa occurred at the same time as another in Oklahoma City. Both incidents left Greenwood residents uneasy. Drumright Evening Derrick, August 30, 1920.

The Elevator Incident
On May 30, 1921, Dick Rowland went to his job as a shoe shiner in a downtown Tulsa office building. Segregation law prevented Dick Rowland from using the restroom in his building, so he was forced to use the restroom on the top floor of a nearby building—the closest “Colored” restroom. Elevators in the 1920s required operators, and women often filled these jobs. On this day Sarah Page, a white woman, was operating the elevator when Roland came to the building to use the upstairs restroom. When the elevator reached the first floor, a clerk heard Page scream and saw Rowland run out of the building. The clerk reported the incident to the police. The police, after speaking with Page, apparently did not consider investigating the incident or apprehending Rowland a high priority. They waited until the next day to arrest Rowland.

The Tribune
Rowland’s arrest occurred after the Tulsa World, the morning newspaper, released their day’s edition. Then the Tribune, the afternoon paper, learned of the incident. One of the central controversies in the story of the Tulsa Race Massacre lay in what the Tribune did with this story. Many Tulsans reported the Tribune contained two articles on Rowland. One, a front page story, reported that “Diamond Dick” Rowland assaulted a “17-year-old white elevator girl” and that the police arrested him. The other piece, on the editorial page, “To Lynch a Negro Tonight,” has been never been verified because no complete copy of this issue has ever been located. Throughout the afternoon, the newsboys sold their papers by shouting, “A Negro assaults a white girl!” Throughout the white community in Tulsa, rumors of a plan to lynch Rowland spread.

This is the front-page article of the Tulsa Tribune about the incident between Page and Rowland on the afternoon of May 30, 1921 (image courtesy of the California African American Museum).

Local Law Enforcement
The law enforcement’s response may not be a primary cause of the massacre, but their actions once the violence began made the situation more deadly. The police chief deputized 500 men, all white, from the crowd that gathered as a potential lynch mob. He gave them weapons and sent them out to “deal” with the situation as they saw fit. These newly empowered men looted, burned, and killed with that police authority. The local National Guard focused their efforts on arresting and interning all African Americans that they could locate. This left Greenwood vulnerable with few to defend it. At certain points in the hours-long conflict, the National Guard also shot at African American residents in coordination with other white attackers.