The Crowd Gathers
On May 31, hundreds of white Tulsans gathered outside of the Tulsa County Courthouse as the afternoon turned into evening. They sent in a group of men demanding the deputies hand Rowland over. The sheriff had taken measures to prevent anyone from taking custody of Rowland. At 9 p.m., an armed group of 25 African American men, many of whom were recent World War I veterans, came to the courthouse to offer their assistance in protecting Rowland. The sheriff declined their help and assured the men that the situation remained under control. The group returned to Greenwood. The arrival of the men angered the white mob, which continued to grow in size. It now stood at approximately two thousand. The sheriff took additional precautions and pleaded with the crowd to disperse. 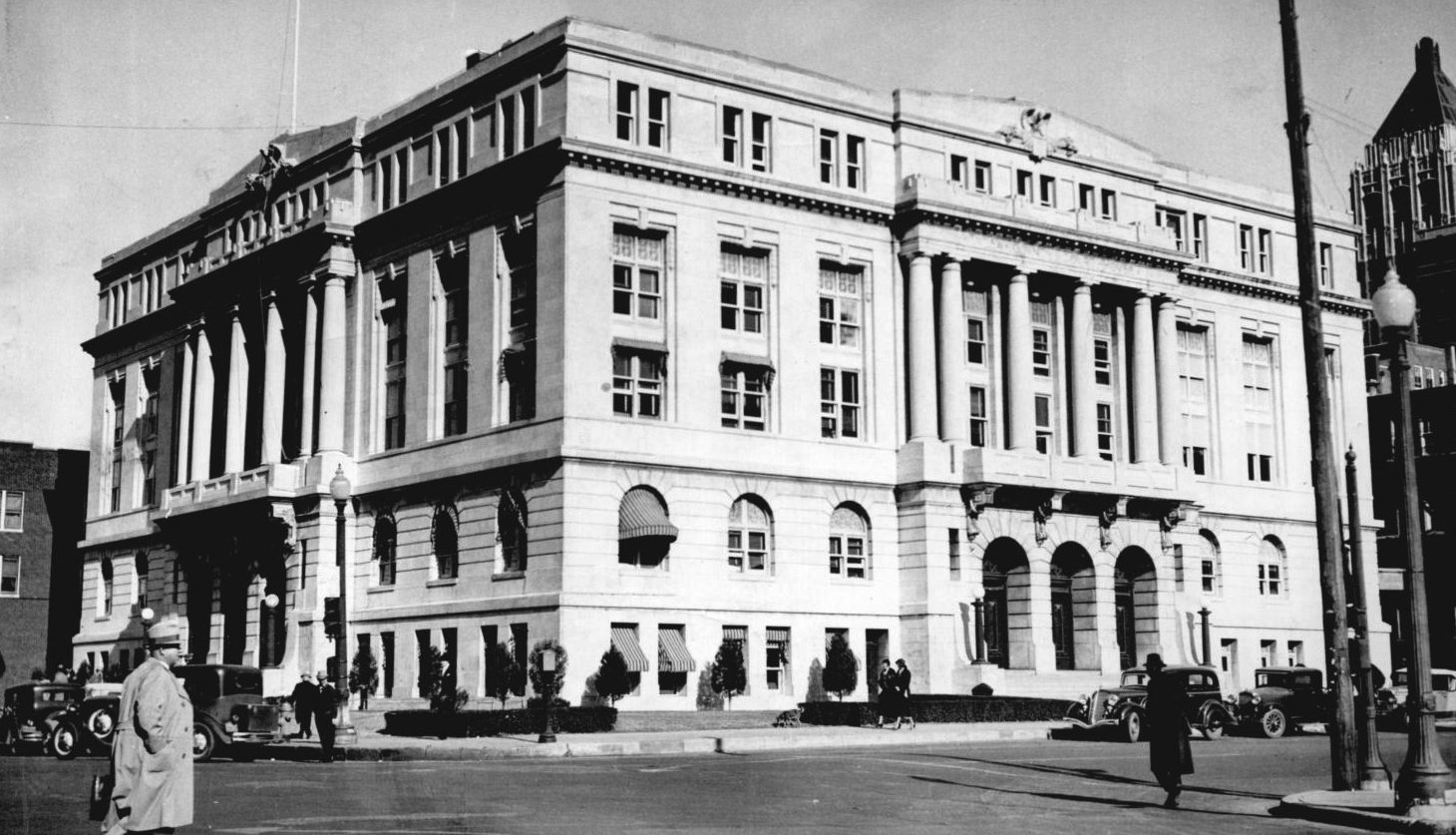 The Spark
Shortly after 10 p.m., a group of 75 African American men, returned to the courthouse and were once again told to leave. As they departed in a single-file line, a white man attempted to disarm one of the African American men. The man resisted. In the scuffle, the weapon discharged. Both sides exchanged fire.

Running Battle
The African American men engaged in a fighting retreat back to Greenwood as armed whites attacked them. The local police force expanded as the chief deputized 500 white men and boys. Those who did not have weapons went to local pawnshops, hardware stores, and sporting goods stores, breaking in and stealing guns. The targets of the mob evolved from the original armed group to any African American person. Indiscriminate killing began. As both sides reached Greenwood, deadly battles erupted, particularly along the Frisco railroad tracks. In other parts of Greenwood, whites drove into the neighborhood and killed residents from their cars. Some whites began setting fires to property in Greenwood at around 1 a.m. White rioters prevented the fire department from extinguishing the flames.

The National Guard
Some rioters demanded the weapons at the National Guard armory. The guardsmen on duty refused to hand out the weapons. Later, after the authorities officially asked for the assistance of the National Guard, their primary responsibility lay in arresting all of the African Americans in Greenwood and holding them at various locations throughout the city. Another group of guardsmen assisted other whites in attacking groups of remaining African American men who were still defending their property, families, and community.

The Invasion
As dawn approached, approximately 10,000 whites hovered around the edges of Greenwood. Many African Americans remained in their homes, hoping to avoid the conflict and protect their families and property. White men had hauled a machine gun to the top of a grain elevator. At 5:08 a.m., a signal pierced the air. In response to the signal, the machine gunners began firing into Greenwood. The rest of the mob began marching and driving into the neighborhood. Moving from house to house, white rioters broke into homes and businesses and forced the occupants out for internment. Then, they looted the properties. 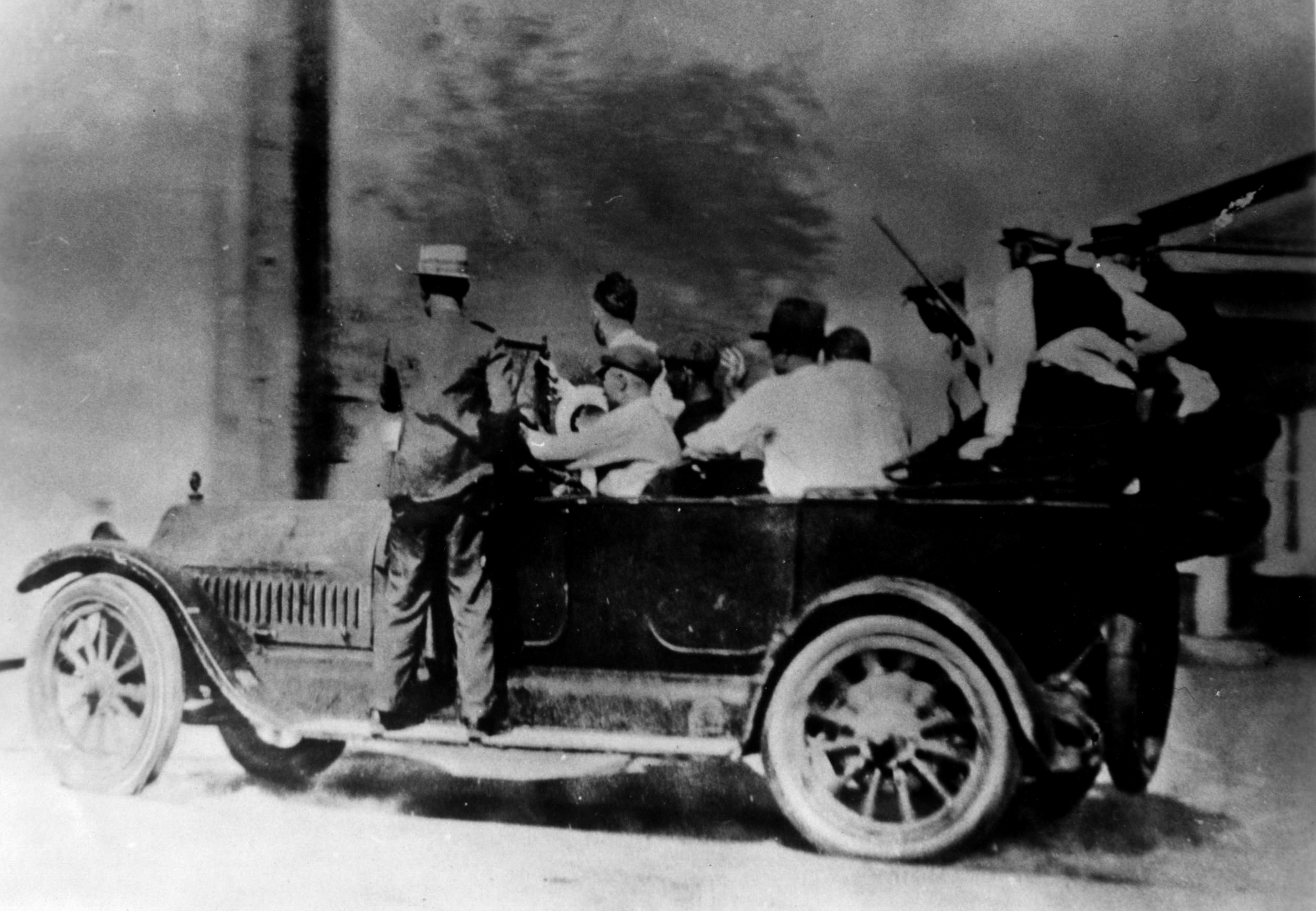 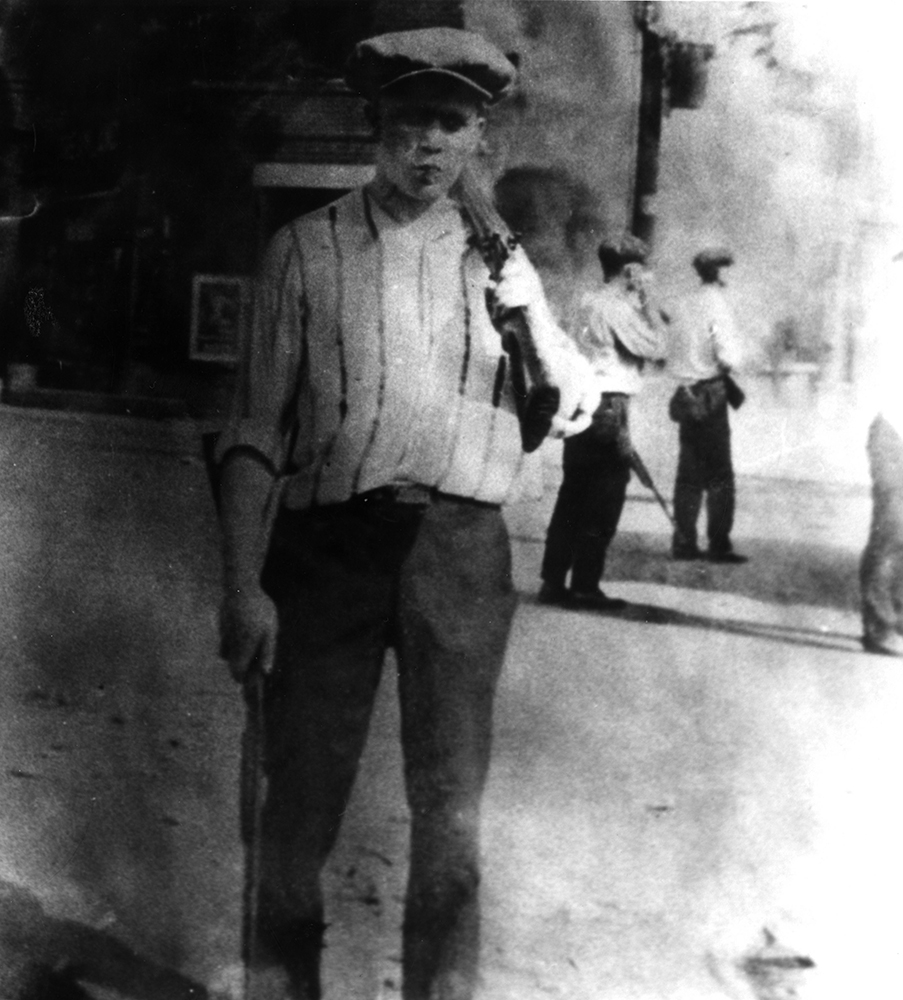 The Fires
The white rioters set fires “house by house, block by block” as they moved through Greenwood.

As the whites moved north, they set fire to practically every building in the African American community, including a dozen churches, five hotels, 31 restaurants, four drug stores, eight doctor’s offices, more than two dozen grocery stores, and the Black public library. More than a thousand homes were torched, the fires becoming so hot that nearby trees and outbuildings also burst into flame.
—Tulsa Race Riot: A Report by the Oklahoma Commission to Study the Tulsa Race Riot of 1921 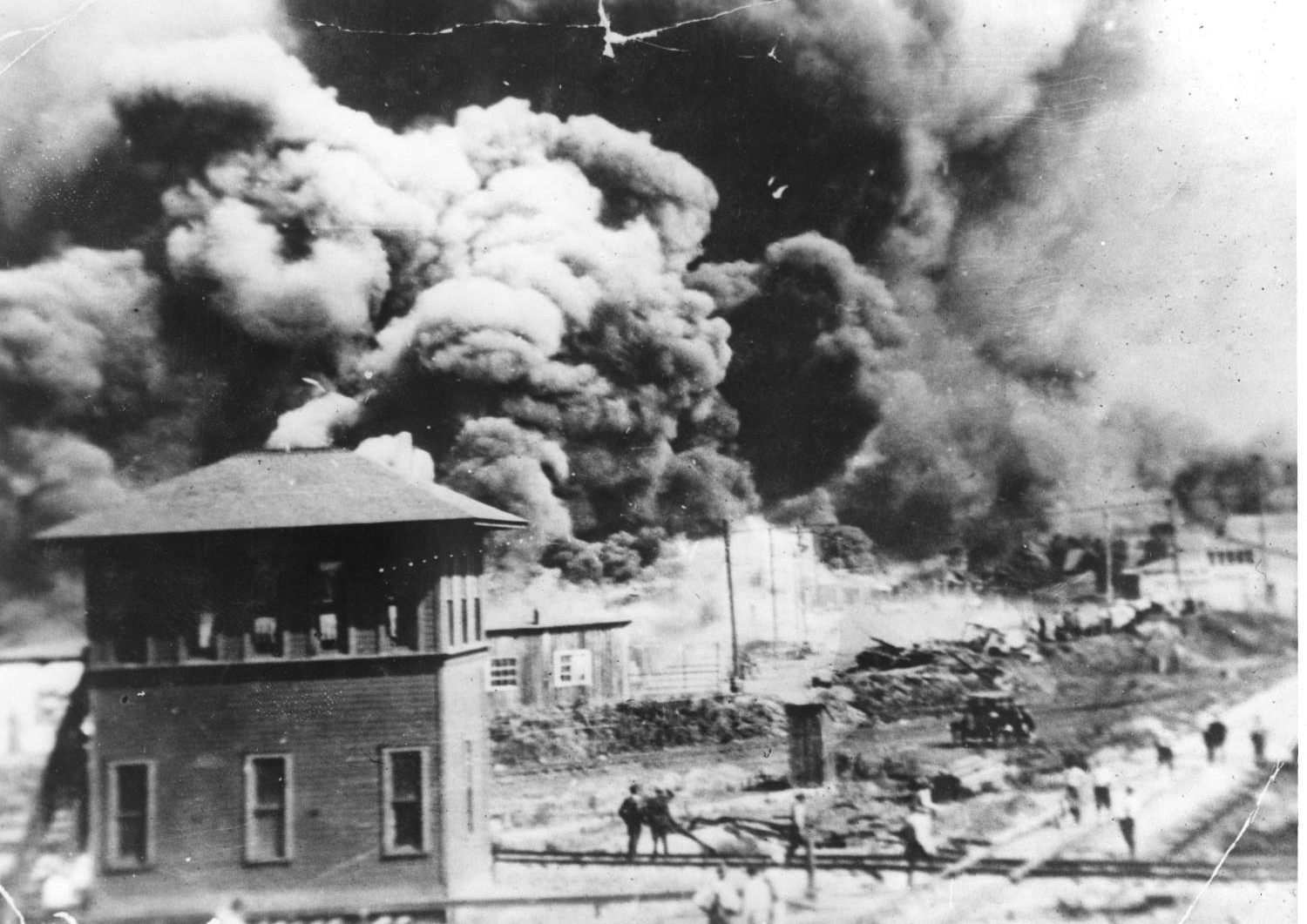 State Troops Deployed
Deployed at 10 p.m. the night before, one hundred Oklahoma City National Guard troops made their way to Tulsa. Upon their arrival at 9 a.m., their commander secured a declaration of martial law. As more National Guard members entered Greenwood, most of the rioters headed home. The National Guard took custody of the camps and declared order restored at 8 p.m. that evening. 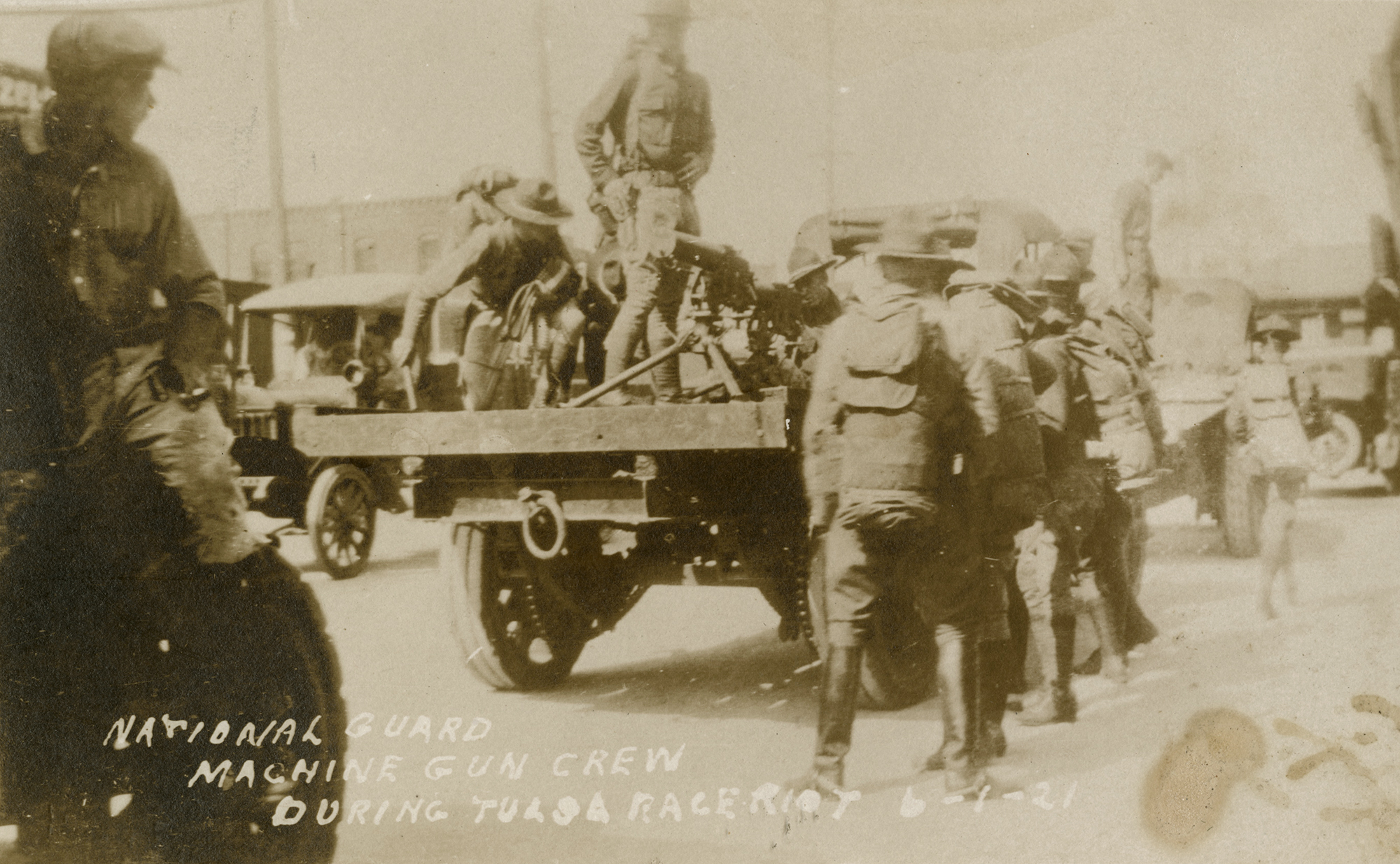