On Saturday, November 13, Dr. Bob Blackburn will make a presentation on the history of Fort Gibson that will take place in the Commissary building at the top of the hill on Garrison Avenue at the Fort Gibson Historic Site. This presentation is taking place in conjunction with the exhibit Crossroads: Change in Rural America which will be on display at Fort Gibson until December 11, 2021.

Fort Gibson served a pivotal role in the political, social, and economic upheaval that marked the westward expansion of the United States. Built at the critical crossroads of the Three Forks where the Arkansas, Verdigris, and Grand Rivers converge south of the Ozark Plateau, Fort Gibson was key to river navigation. It also served as an outpost on the Texas Road connecting settled Missouri with the new country of Mexico after independence from Spain in 1820.

Fort Gibson was established in 1824 to keep the peace between the Osages and Cherokees. It figured prominently in the Indian removals and was home to many of our nation’s leaders during the 1840s and 1850s. Fort Gibson served as a starting point for several military expeditions that explored the West. 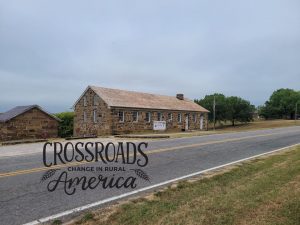