“Kansas Abolitionist and the Civil War” presentation by Debra Goodrich

Honey Springs Visitor Center will host Ms. Debra Goodrich on Thursday, April 7, at 7 p.m. for a special presentation about life and career of former Union Army Officer of the Second Indian Home Guard, who fought at the Battle of Honey Springs, John Ritchie. Ms. Debra Goodrich will detail Ritchie’s history beginning with his involvement as an abolitionist in Kansas during the Bleeding Kansas years leading to the Civil War, his involvement as a delegate in two Kansas Constitutional Conventions: Leavenworth (1858) and Wyandotte (1859), and his service as a Union Army Officer during the Civil War. This will be an after-hours program. Visitors are encouraged to tour the center’s exhibits, purchase items from the Friends of Honey Springs Gift Shop and view the new film Battle of Honey Springs after the program.

A popular speaker, Ms. Goodrich brings history to life. She has been a talking head in numerous documentaries including the Emmy-award-winning American Artist: The Life and Times of George Caleb Bingham and The Road to Valhalla, recipient of the Wrangler Award. She appeared in AHC’s Gunslingers Series on Wild Bill Hickok and the History Channel’s States and Aftershock. She is writing a biography and screenplay on Charles Curtis, our only American Indian Vice President. Deb lives in western Kansas where she is the Garvey Texas Foundation Historian in Residence at the Fort Wallace Museum and the host of Around Kansas weekly TV show. Her articles have appeared in national publications including Wild West Magazine and Armchair General Magazine. Her books include The Civil War in Kansas and The Darkest Dawn: Lincoln, Booth, and the Great American Tragedy (co-author). Deb serves as chair for the Santa Fe Trail 200, the bicentennial of the Santa Fe Trail to be marked from 2021-2025.

She and filmmaker, Ken Spurgeon, have just completed production of the docudrama, The Contested Plains.

Her areas of expertise are Bleeding Kansas and the Civil War; Plains Indian Wars; Vice President Charles Curtis; Abraham and Mary Lincoln; Jefferson and Varina Davis; and John Brown. She is also one of the historians chosen by C-SPAN to rank the presidents with each new administration.

For more information regarding the presentation and Honey Springs Battlefield, please email honeysprings@okhistory.org or alynn@okhistory.org, or call 918-473-5572. Honey Springs Battlefield is located east of U.S. Highway 69 between Oktaha and Rentiesville. The visitor center is located on a hill within close proximity to the Oklahoma Blues Hall of Fame in Rentiesville. Take the second left after reaching the Oklahoma Blues Hall of Fame Museum (driving from the west). 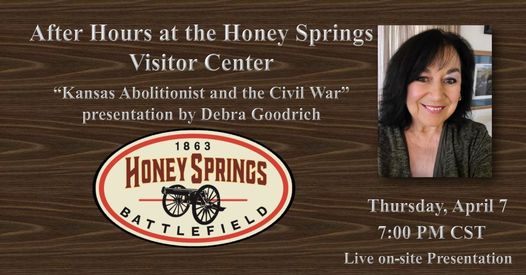