Integration is the ending of segregation and allowing whites, African Americans, and all races to be together whether in schools, buses, or movie theaters. Many people in Oklahoma, such as Clara Luper, and nationwide worked to end segregation and bring about integration. All public schools, including those in Oklahoma, had to desegregate their schools because of the 1954court case Brown v. Board of Education. Universities, however, also needed to be integrated.

Ada Lois Sipuel Fisher, from Oklahoma, was a leader in the nationwide Civil Rights Movement. Fisher dreamed of being a lawyer, but Langston University, an All-Black college she was attending, did not have a law school. Colleges and universities were segregated, so Fisher was not allowed to attend a school in Oklahoma that had a law school. She decided to apply for the law program at the University of Oklahoma anyway. The university denied her admission due to the segregation laws. She filed a lawsuit against the school. Amos T. Hall and Thurgood Marshall were her lawyers. Jake Simmons helped fund her case. The case went all the way to the United States Supreme Court. The case, Sipuel v. Board of Regents of the University of Oklahoma, declared that she must be allowed the same opportunities for education as everyone else. After three years, in 1949, she was allowed to attend the University of Oklahoma.

Fisher and fellow African American students, although allowed to attend universities in Oklahoma, were still segregated within the schools. The school forced Fisher to sit in a chair with a chain around it and a sign that read “Colored.” Black students were also made to sit in a different part of the cafeteria and in a separate, back part of the classroom. An African American student from Oklahoma, George W. McLaurin, took this issue to court. In 1950, the US Supreme Court ruled in McLaurin v. Oklahoma State Regents that this was not allowed.

With the efforts of Oklahomans and people nationwide that participated in the Civil Rights Movement, our society changed so that all people, no matter the color of their skin, can be together whether in school, at home, or in public places. However, today people do not always treat each other with fairness and respect. Bullying continues to be a problem in school, but you can continue to help the Civil Rights Movement by making a friend with a classmate who may be different from you or standing up to someone who may be bullying a classmate or friend. 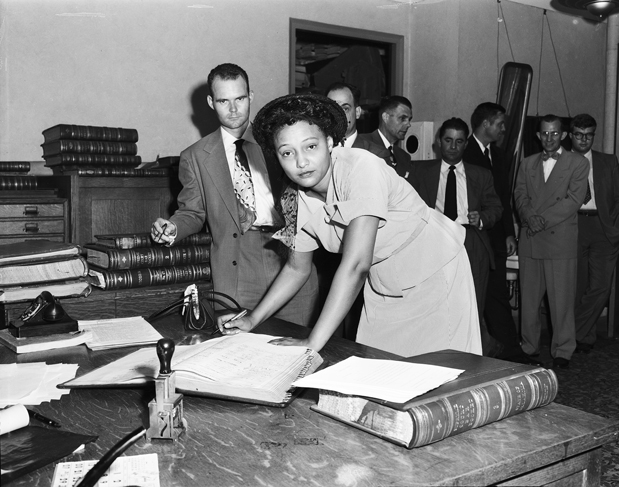 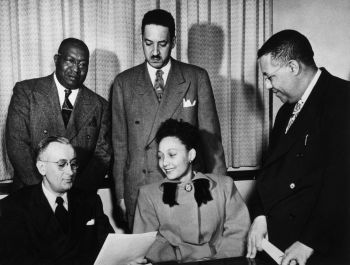 Fisher filing her application with Thurgood Marshall on the far right (image courtesy of the Library of Congress). 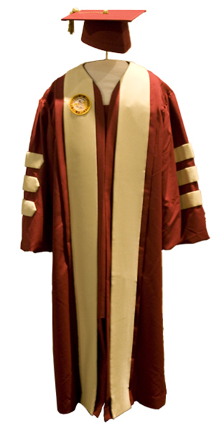 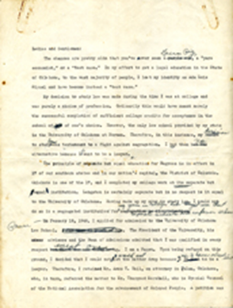 Read a description of this event by Ada Lois Sipuel Fisher