The State Capitol houses an impressive art collection including murals, paintings, and sculpture. The pieces reflect the rich and diverse history of Oklahoma. Highly respected artists created these pieces of artwork to share with everyone who visits the State Capitol.

Outside, a large sculpture entitled As Long as the Waters Flow reminds visitor that the land upon which the Capitol is built is originally land owned by tribal nations. This is represented in the form of an American Indian woman. The artist of this piece is Allan Houser (Chiricahua Apache). Other pieces of his work can be seen at the Oklahoma History Center, the Sam Noble Museum of Natural History, the United Nations, and the National Portrait Gallery in Washington, DC. 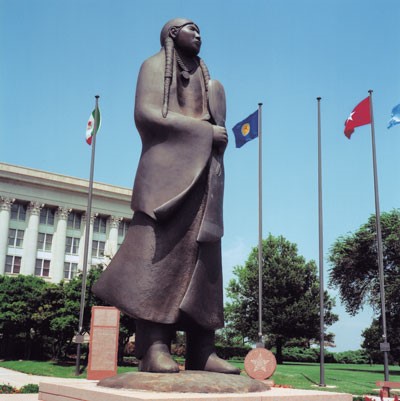 Inside the capitol are several murals painted by Charles Banks Wilson. These murals create a timeline of Oklahoma history. The first shows the Coronado expedition exploring the land that will become Oklahoma. The second depicts trade between different fur traders and American Indian hunters while a fort, showing the presence of the military, can be seen in the background. The third mural presents the Indian removals to this land when it was Indian Territory that occurred in the nineteenth century. The final mural shows the settlement of non-Indians through a depiction of the Land Run of 1889.

Other murals celebrate the cultural impact of the Five Moons, a group of indigenous ballerinas from Oklahoma; the oil and gas industry; and farming and ranching. The first hundred years of Oklahoma’s history is celebrated in Carlos Tello’s Beyond the Centennial, dedicated in 2010. 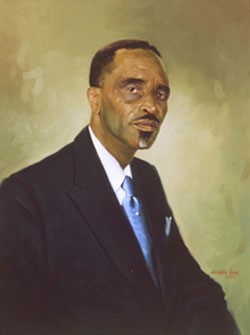 The people who helped make Oklahoma what it is today are also featured in pieces of art at the State Capitol. Artists captured numerous well-known Oklahomans in portraits and sculptures throughout the building.