Home |   Learn |  From Vaqueros to cowboys

From Vaqueros to Cowboys

Following the colonialization of Mexico, the Spanish quickly established an encomienda system headed by conquistadores. The encomienda system granted large areas of land to the patriarchs with the responsibility of converting and providing for the Indigenous people who populated the conquered lands. In doing so, they established a racially-based caste system. The caste system divided individuals into classes that resembled the feudal class systems seen in Europe. The caste system established social rules and expectations for each class. There were regulations and restrictions on the lifestyles of those towards the lower levels of the system. This system’s social order placed Spanish-born individuals at the top.

However, as time progressed, landowners established haciendas, and Catholic missions began to raise cattle as a source of income and food. The raising of cattle at the haciendas led to a demand for men skilled in horseback riding. Originally seen as an activity only for Spanish nobles, horseback riding quickly spread among the working men of the haciendas by necessity. Some of these working men were campesinos. A campesino is a small farmer that owns no land, many of whom were Indigenous or mestizo. Mestizo is a racial classification from the caste system that includes those of both Indigenous and Spanish descent.

These early vaqueros developed many of the early roping techniques, which can still be seen today. These techniques can be traced back to the jinetea riding style imported by the Spanish. This riding style allowed the vaqueros to move the cattle miles at a time easily. With no readily accessible markets in Mexico, the vaqueros began moving the cattle north into French Louisiana. As time progressed and markets began to open elsewhere, driving cattle over long distances became a prominent economic activity from Mexico to Kansas.

These working campesinos would become the earliest vaqueros, or cowboys. 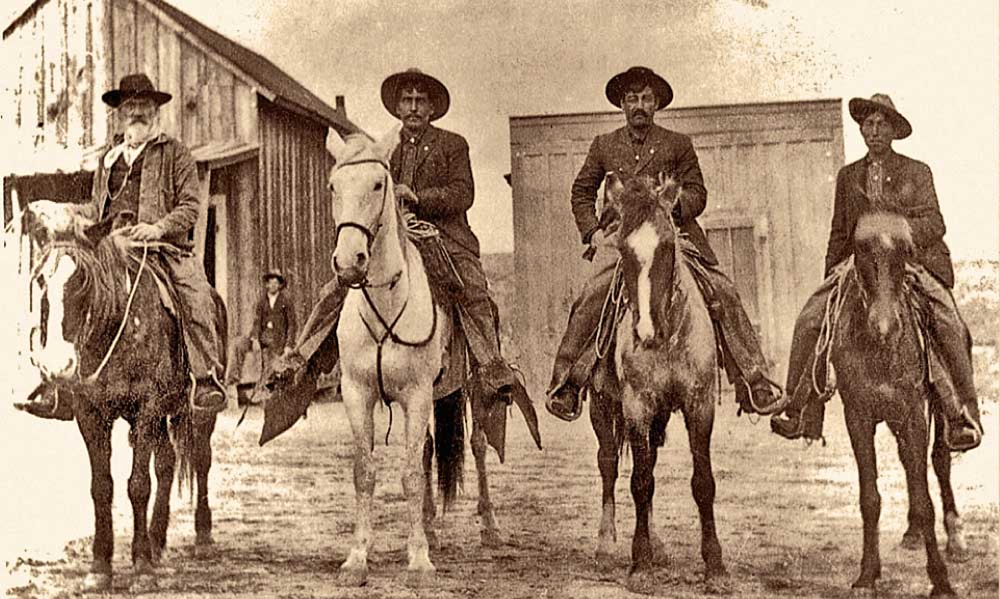 
“While the vaqueros worked the range, the charro played.”—Richard W. Slatta

Charros also influenced the drovers that moved through Indian Territory. Charros developed from haciendados, or wealthy landed elite with both military and horseback riding skills. During colonial rule in Mexico, these landed elites often oversaw cattle counting as commissioned by the king. Haciendados and hired vaqueros would gather the cattle together. The counting was extensive, very detailed, and took a considerable amount of time to complete. In the meantime, the haciendados would often participate in alardes, or military drills. These were often used to demonstrate military ability. The landed elite and vaqueros would also hold competitions to pass the time. These competitions often showcased horseback riding and roping skills that were used when herding and driving cattle.

Over the centuries, these friendly competitions would become charreadas. Charreadas are made up of various events that mirror situations vaqueros would encounter on the drive or while working at a ranch. Contestants were judged on their roping and horseback riding skills. Charreadas place an emphasis on showmanship and style; as such, their dress was yet another part of the competition. 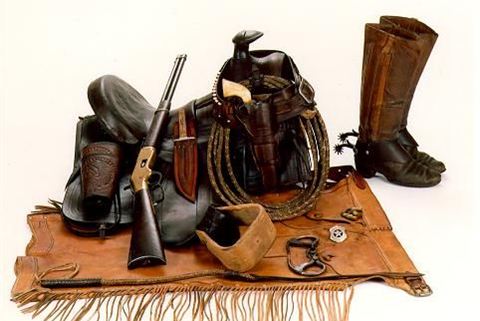 The tools and clothing of cowboys and ranch hands in the southern US originated among vaqueros (image courtesy Museum of Northwest Colorado).

There are multiple versions of the charro outfit indicating different levels of formality. The working outfit is called the faena. The others are media gala, gala, gran gala, and etiqueta, with the etiqueta being the most formal (image courtesy Mexican government).

Mexico gained its independence in 1821. Although Mexico was no longer under European rule, their influences left lasting legacies. The black gala charro suit is one such legacy: this suit still continues to be a symbol of Mexico and its people to this day.

Charro suits have several other styles depending on the occasion in which they are being used. Brown charro are the most common when participating in actual charreadas while the black gala suit is usually reserved for formal events. Mariachis across the world famously wear the black gala suit. 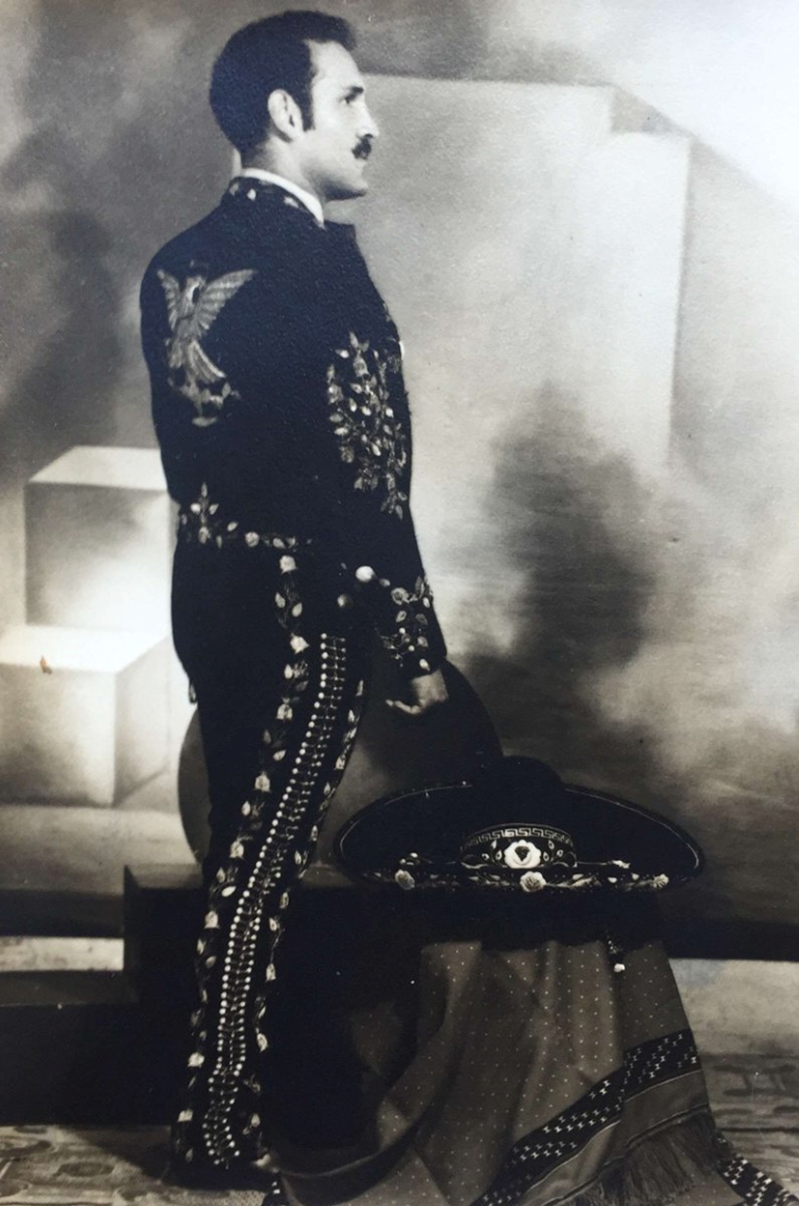 While the charro has become one of the most well known Mexican symbols, vaqueros were the workforce that allowed many of the early charros to enjoy leisure time and elevated status. Vaqueros had to be extremely skilled to manage and maintain the cattle properly. Vaqueros had their own set of clothing, which consisted of coarse wool clothing and tight-fitting pantaloons. The food eaten by vaqueros would be considered undesirable by most. At times, vaqueros would have to rely on catching food while out during the drive.

One of the most difficult aspects of the cattle drives was the loneliness and solitude. Corridos, or narrative ballads, were a great way for cowhands to pass the time and entertain themselves. These corridos were also used to tell stories about significant figures, well known racehorses, myths, and folk tales. Many of the vaqueros were illiterate, and these corridos were their only way to learn such stories. Corridos are still incredibly popular in Mexico and increasingly popular in the United States and across the world.

During the nineteenth century, the United States received large swaths of land from Mexico following the Mexican-American War. These large land tracts make up states like Texas, Arizona, California, New Mexico, and even parts of the Oklahoma Panhandle. This drastically increased Anglo-settler migration into the area. Cattle raising and driving quickly became a lucrative endeavor. However, due to little know-how or previous experience, many were quick to hire experienced vaqueros to assist on Anglo-led cattle drives. As the century progressed, the modern American cowboy came to be. Cowboys maintained a close connection to the traditions of the vaquero. This can easily be seen in the crossover of Spanish words into English, such as lazo (lasso) and rodeos (roundups). 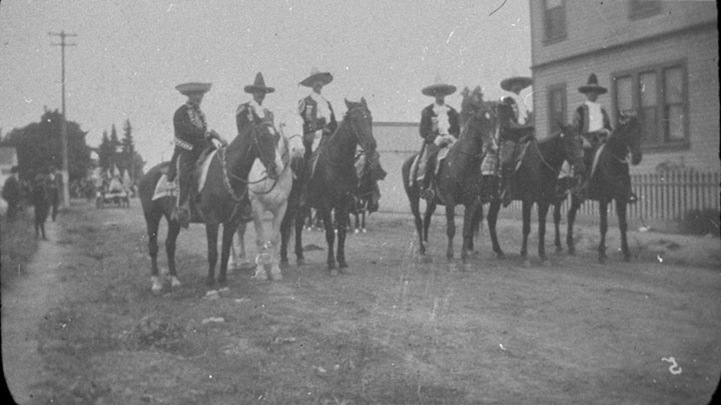 The vocabulary of the cattle drives was largely in Spanish or derived from Spanish words. This photograph shows vaqueros in Texas (image courtesy Bullock Museum).