Home |    The Opening of Oklahoma |  The Dawes Act and Allotment

The Dawes Act and Allotment 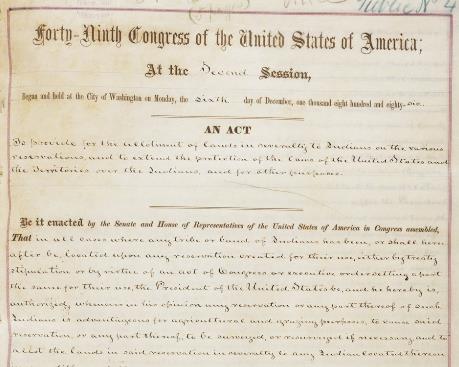 Elias C. Boudinot and the boomers represented a broader shift in what people thought about Indians and the policies affecting them. In addition to the boomers who simply wanted Indian land, reformers noted high-profile cases of corruption that caused real harm on the reservation. Many believed the reservation system benefitted no one. They argued that the US government needed to do something to protect Indians from abuse. In the nineteenth century, most non-Indians in the United States believed that land ownership offered that protection. From their perspective, owning land allowed a person to support themselves without relying on anyone else for their survival. They also thought that the more Indians adopted their way of life, the better off the Indians would be. One supporter in the influential Indian Rights Association advocated "the absorption of the Indians into the religious, political and social life of the American people. Only in this way can they be preserved as individuals from ultimate destruction."

Support grew for a proposal to take the reservation land and assign it to individual Indians as their private property. Breaking tribal land into individually-held parcels is called allotment. Eventually, this idea became the Dawes Act along with some other elements. These include dissolving the tribal governments, allowing most Indians US citizenship after a period of time, and selling the excess land. A requirement for Indian children to attend boarding schools, where the curriculum and living conditions modeled assimilation, was also a part of the Dawes Act. Authors and supporters of this law believed that by assigning individual Indians private property, pushing them to farm, and educating their children for non-Indian society would permanently solve the challenges facing Indians.

The Dawes Act did not apply to the Five Tribes.